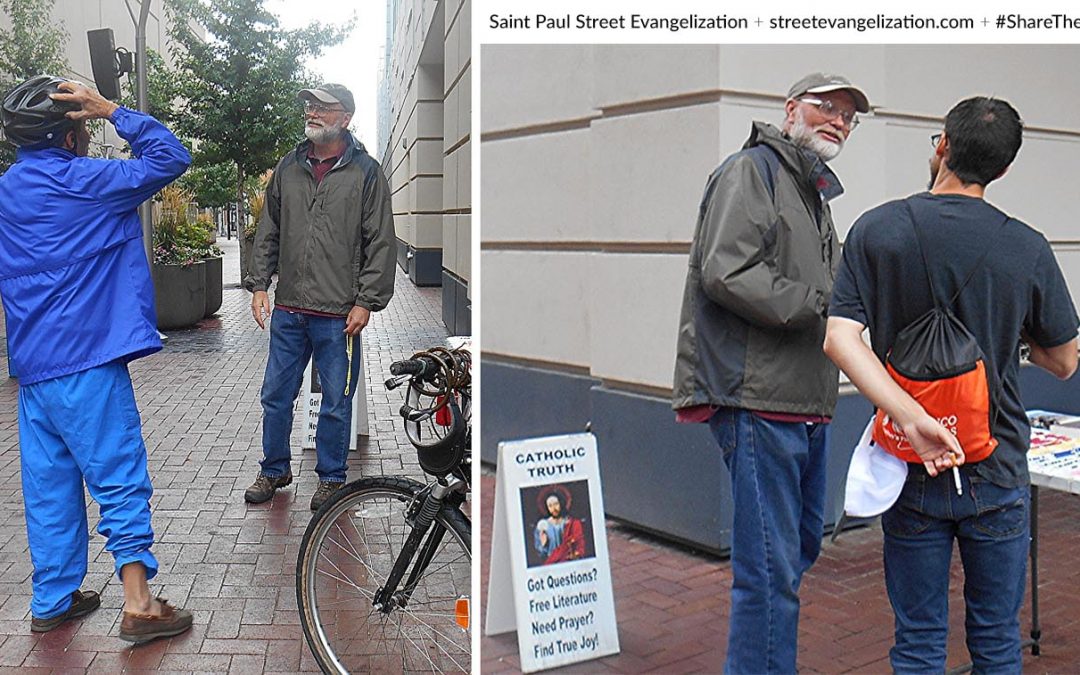 Boise, ID. So many false notions of God and truth are floating around out in the world today. And people don’t even know they are falsehoods. St. Norbert once said to the people of Antwerp, “Unwittingly you have pursued falsehood thinking it to be truth. If you had been taught the truth first you would have been found effortlessly tending toward salvation, just as you now effortlessly lean toward perdition.” As Catholics, we have been blessed with the Truth. Let us take this responsibility with the utmost seriousness, and tell as many people that will listen about Jesus and His Church.

The following report comes from evangelist Chuck and our team in Boise, ID:

Two evangelists were available for today’s outing. Foot traffic was fairly light, due to rainy weather.

A couple, perhaps in their early twenties, stopped to talk. The woman was upset at the Catholic Church, because her brother had committed suicide and her Catholic parents reacted by angrily writing him off as hopelessly condemned. Evangelist Lucy clarified the Catholic teaching: God grants enough grace to everyone to be saved; so we can hope that her brother was granted a split second before his decision became final to repent. The evangelist encouraged the two to pray for him, because God could “backdate” their prayers. They agreed to do so, and each accepted a rosary.

Later on, a woman stopped and asked for a medal with Mary on it. Our stash of Miraculous Medals was hiding from evangelist Lucy’s view at that moment, so she offered our visitor a St. Benedict medal instead, telling her of its historic origins and protective value. She graciously accepted. The woman, a non-Catholic “completed Jew”, but now-inactive Christian, is fond of Mary. She first heard of Our Blessed Mother when a Christian childhood friend told her that she looked like Mary. Currently, our visitor was suffering from the break-up of a romantic relationship and surprised herself at how much she was revealing to two sympathetic strangers. Please pray for her. As is common in abuse situations, she still thinks about reconnecting with him.

Praised be Jesus Christ! Our Lord is real, and we want those who we evangelize to know that, and grow close to Him and be saved.