“Learning from Our Mistakes” 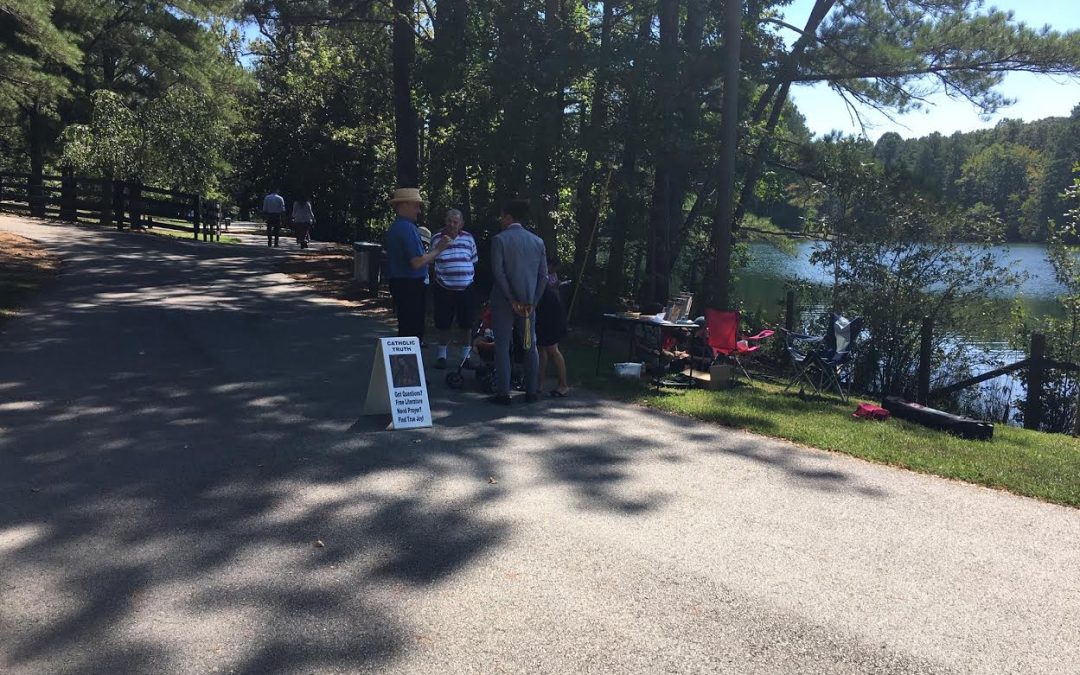 Suwanee, GA  We all make mistakes. It’s one of the great lessons in humility when we mess something up and need to step forward and take responsibility. While most of us try to hide our mistakes (although hopefully not from God or our confessors), there are those humble souls who simply admit their shortcomings in front of others and are OK with being seen as they are: an imperfect creature that’s trying their best. Hopefully, today’s story shows us all that it’s OK to mess up…as long as we own up! When St. Bernard of Clairvaux was asked what the three most important virtues are, he responded “Humility, humility, humility.”

The following report comes from the Suwanee, GA team:

We had a very good outing yesterday at Sims Lake Park. There were between five and seven evangelists there, two for the very first time! Although it started out very slow, we ended up having five or six meaningful engagements. We spoke with a couple of Baptists and a Lutheran worship leader. All of the engagements were very amicable and pleasant.

The most significant conversation of the day was with a woman (Terri or Kerry) whom we initially offered a rosary to, and eventually learned that although not Catholic herself, she’d been attending Saint Monica Parish with her husband and child. Her husband was Catholic and she had been taking her child to Saint Monica for catechesis and preparation for the sacraments. We asked her if she had considered becoming Catholic herself and she said she had but had not seriously looked into how. We provided her with a Church bulletin and noted the person with whom she would contact regarding Adult Faith Formation.

One footnote on this last engagement that we discussed afterward was the fact that we probably overwhelmed her with information coming from multiple evangelists. One was providing her information on how to pray the rosary, another was handing her literature about the Catholic Church, in general, while yet a third person was providing her information about who to contact for inquiring about RCIA at St. Monica. This was probably too many people at one time and we should take note to not overload people with too much information at once. We will continue to pray for her that she will seriously look into the RCIA program at Saint Monica.

Praised be Jesus Christ! While it may have been a bit much for this woman to handle, thanks be to God we have evangelists willing to step out and share the Gospel, albeit imperfectly. Let’s pray that God takes all of our imperfect efforts and transforms them into something He can use for the salvation of others!