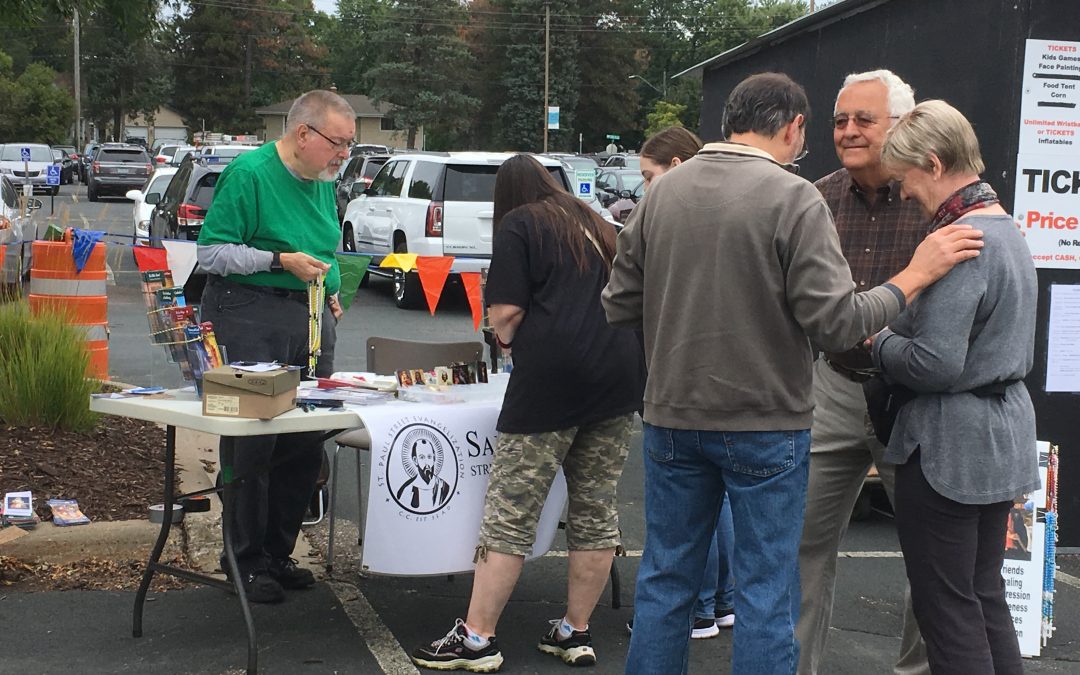 St. Paul, MN.  We often use the phrase “child’s play” to describe a task that is easy. But sometimes our evangelizing efforts are literally child’s play, when we send out small, joyful children to share the saving message of Jesus Christ. Perhaps the people they encounter see the innocence and their guards are let down, allowing the truth and beauty of Our Lord to enter in. Today’s story is a perfect example of how effective children can be at sharing the Gospel.

Recently we were out for two days at the huge Nativity of Our Lord County Fair. Bill has been awesome in arranging for us to have a table for the past four years at the County Fair. We always have lots of kids stop by to get our free medals and rosaries, since Nativity has a large Catholic school. This year, we had small packets with a crucifix or Miraculous Medal and holy cards, and for each medal the kids took, we challenged them to take a packet and give it away to someone they knew who needed to know the love of Jesus. We had them share with us why Jesus died on the cross for us (to pay for our sins, open heaven so we could be there with him and to show us his love), and then encouraged them to share that message with whomever they shared the packet. It was a huge success! Lots of parents and other students came by to get a free medal or prayer because of those packets. Those kids were our hands and feet!

One young lady stopped by with her mom, Jenny. The young girl asked if we knew which saint was in charge of worried people. I asked if she was worried about someone and she said, yes, that her mom was going to start chemotherapy for cancer. I gave her a St. Jude medal and holy card, and asked if we could pray right then for Jenny. After our prayer, they both had smiles on their faces, took Miraculous Medals and said they felt much less worried about Jenny’s upcoming treatment. One of the carnival workers, Tara, came by on her break to see what we were doing. She took a St. Christopher medal for travelers and we prayed a short prayer for her protection and she went back to work. About an hour later, she stopped by again, and said, “I had to come back and tell you that I have had a terrible migraine since yesterday. I took all the medication I could but it wouldn’t go away. After I put this medal on my migraine is gone. I’m never taking it off!” I shared her joy, prayed in thanksgiving to Jesus for her healing, and then asked her about her faith life. She goes to a Bible church in Virginia near her home. I asked if she would be willing to read our pamphlet “Why Be Catholic” and she said she absolutely would.

Praised be Jesus Christ! St. Teresa of Calcutta once said “The child is the beauty of God present in the world, that greatest gift to a family.” Small children are so innocent and precious, they often disarm people that may not listen to another adult. Thank God for the gift of children!