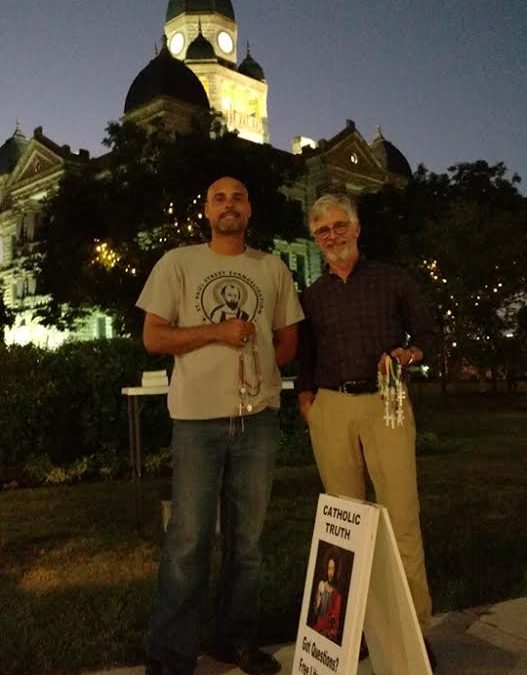 Fort Worth, TX. While it’s obvious to us Catholics why we reverence the Blessed Virgin Mary, many Protestants struggle this. If they only understood all of her extraordinary qualities, her immense love, her place of honor in heaven, they would certainly agree that special veneration is due to her. St. Louis de Montfort gives us a glimpse of the power and special graces God has granted her: “Mary has the authority over the angels and the blessed in heaven. As a reward for her great humility, God gave her the power and mission of assigning to saints the thrones made vacant by the apostate angels who fell away through pride. Such is the will of the almighty God who exalts the humble, that the powers of heaven, earth and hell, willingly or unwillingly, must obey the commands of the humble Virgin Mary. For God has made her queen of heaven and earth, leader of his armies, keeper of his treasure, dispenser of his graces, mediatrix on behalf of men, destroyer of his enemies, and faithful associate in his great works and triumphs.” Lord, when we evangelize, help us communicate how special Our Lady is when we encounter Protestants who don’t understand why Mary is special or refuse to believe in her exalted state above all creatures.

The following report comes from our Fort Worth, TX team:

Three evangelists from the Fort Worth SPSE team evangelized at Denton Courthouse Square on Friday evening. It was beautiful weather, and there was good pedestrian traffic. We engaged with many people and gave out many rosaries and literature.

We had a long conversation with two women who approached us. One woman significantly disagreed with Catholic reverence for Our Blessed Mother. We gave her various Biblical texts that support Our Blessed Mother’s role, such as the Our Lady’s intercession as the wedding feast at Cana, Our Lord gave her to us as our mother, the queen mother of the Davidic Kingdom, and Our Lady as the New Eve, the mother of all who live in Christ. At this point the other woman starting asking questions. I spoke to the second woman while Mark continued to talk with the woman who had asked us about Mary. The second woman and I spoke for a long time. We discussed Confession, the Eucharist, Unity as one of the four marks of the Church, the Saints, etc… We also spoke a lot about personal holiness. It was an engaging conversation in which we discussed the radical love and sanctity we are called to live out in Christ. We discussed carrying our crosses, and how the greatest witness we can give to the world is the way we live our lives. She is a school teacher, and she spoke about her concerns for her students and the direction of society. We discussed how the radical example of virtue and holiness that we are called to live will be the light that will convert the world again.

Mark, one of the evangelists, made flyers with the address, contact information, and sacramental information for the local parishes. This was a great idea and very effective. I gave that out twice to people who had recently moved to the area and needed to find a parish. One of these was a young man who hadn’t been to Church since he moved to Denton four months ago. I gave him a flyer for the local parish and encouraged him to go to Confession, which was on Saturday. He said he needed to go to Confession and thanked me. The flyer was a great idea and very effective. The other evangelists handed some of these flyers out as well. I’m going to create flyers for the other areas we evangelize in.

Praised be Jesus Christ! Not only is it good to reverence Mary, but it is essential in having a true relationship with Christ. For, as St. Maximilian Kolbe tells us, “If anyone does not wish to have Mary Immaculate for his Mother, he will not have Christ for his Brother.”