“The Fruit of Gentleness” 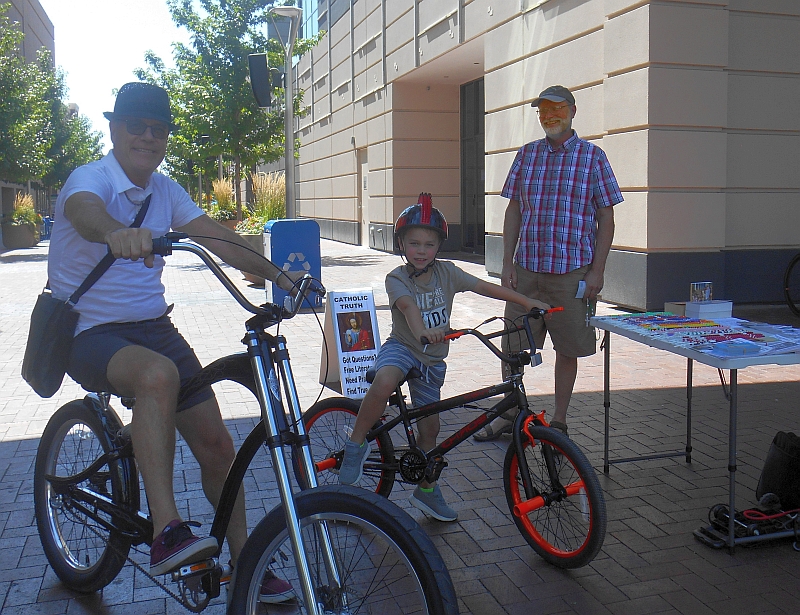 Boise, ID. One of the fruits of the Holy Spirit that is severely lacking in the world these days is gentleness. When you wish to be heard and trusted, approaching with kindness, peace and with a gentle disposition will almost certainly win a person over. Today’s story shows a great example of an evangelist using gentleness while sharing the gospel, and receiving a positive response. (They were complimented twice for it by those they were evangelizing!) As St. Francis de Sales once said, “Nothing is so strong as gentleness, nothing so gentle as real strength.”

Click here to read more stories from our Boise team

The following report comes from our Boise, ID team:

Only one evangelist was available for today’s outing, where we saw some interesting sights like a group of 8-10 pre-teen boys who were skidding their dirt-bike-style motorized tricycles around the center of the square. A man sometimes seemed to be coaching them. When one of the boys came close enough to ask, “Are you a team?”, he looked bewildered. Sadly, none came for a rosary.

One good encounter involved a 20-something man accompanied by two others. The 20-something man stepped away from them and asked in a mocking tone: “Do you really think there’s a devil walking around the earth?” My reply: “We believe there are evil spirits, that they are active on earth, and that the more you sin, the more vulnerable you are to their actions. However, we also believe that Jesus Christ is the Victor and will help anyone who turns to Him.” He thanked me for the gentleness of my reply, saying that some non-Catholic ministers had told him he’d go to hell. He asked for a Divine Mercy card, and accepted a rosary and a pamphlet on how to pray it.

“Katherine”, a chronically homeless woman, stopped for her longest visit ever. She and I reminisced about the changes in the business park in the seven years they’ve allowed the apostolate set up here, and how God was blessing it. She also asked some nutrition questions, and where the least expensive coffee is, since she has no means to brew it herself. She considered accepting a copy of the Catholic Bible, but declined doing so at that time. She, too, thanked me for gentleness. May God bless her, heal her, and restore her to society!

Praised be Jesus Christ! Our Lord and Savior knows how to disarm our hearts with His gentleness, when He tells us in Matthew 11:29 “Take my yoke upon you and learn from me, for I am meek and humble of heart; and you will find rest for yourselves.” Let us approach those we encounter on the street just as Our Lord approaches us in sacred scripture and prayer, and just as our evangelist did in today’s story.