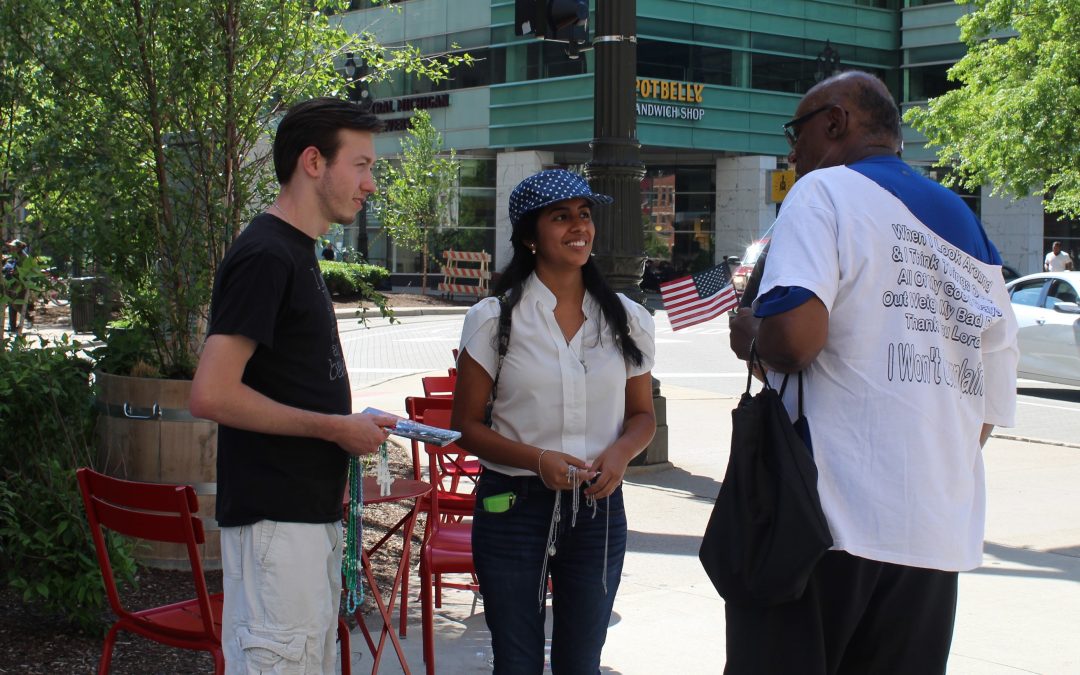 Orlando, FL. While it’s often ideal to establish one particular spot from which you evangelize as people walk by, sometimes that may not be the best method. As we’ll see in today’s story, our evangelists walked through a park situated very near to Walt Disney Amphitheater and approached people wherever they were at. It’s all about what works best, and what the Lord is asking you to do.

We walked towards a small fountain nearby and saw a few men sitting alone in some benches. We approached one man around my age, Charles, who accepted a medal with curiosity. He grew up Baptist but did not attend church anymore. He still believed in God and began to listen as we shared with him about our relationship with Christ. He was very attentive to what we had to say and we encouraged him to look into the website posted on the back of the card to learn more about Catholicism. We ended in a prayer and continued walking.

Walking along the sidewalk we encountered a father and his many children with matching shirts showing an icon of prayer. I offered them some Miraculous Medals, which he at first accepted and then upon seeing the image of Mary said “oh no I don’t think I can take this” but his children piped in that they wanted the medals. He was telling his children no, so with his permission I instead offered to give his children some crucifixes that I had which he agreed to. He mentioned that he was a pastor of a church and did not want his children having miraculous medals, in which we responded that he was still free to take them himself. He held the two medals and agreed to keep them but did not want to continue the conversation, so we thanked him for his time and continued on our way.

Right before we headed out, we met an elderly gentleman in a wheelchair next to the men who we encountered earlier. The man, Sean, told us all about the year he has with his mother passing away and losing his leg. We talked about perseverance and he mentioned how he learned to count his blessings in his life. He shared with us his story growing up in the Carolinas. It turns out this man was adopted into a family that was close friends with Dr. Martin Luther King Jr. and his father was a local pastor at that time. We had a great conversation about showing thanksgiving to the Lord and how important a community of people could be to our faith. I mentioned coming from Mass that morning in the nearby cathedral and asked him if he had ever been inside. He told me he always went there for the bus stop and remembered a nice lady who always brought out food and other items for them but he had never been inside. Although he declined any prayers, he took up our offer to go visit the cathedral soon and was curious to see what Mass looked like.

Praised be Jesus Christ! Thank the Lord for their first eventful day of street ministry. Keep the ministry in your prayers as they head out in October!