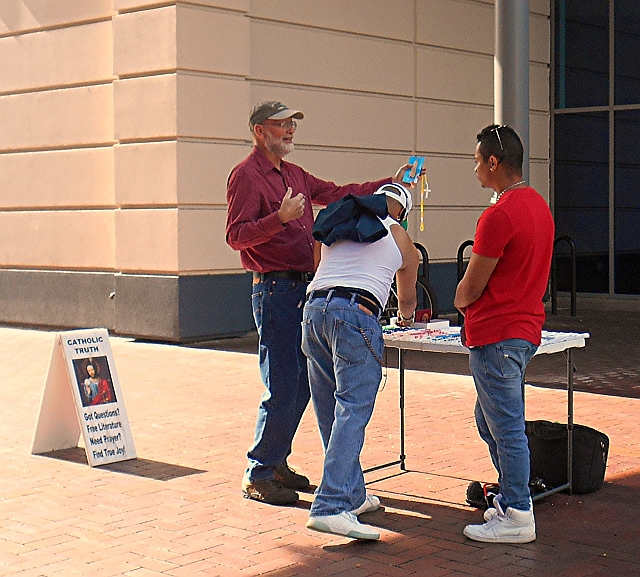 Boise, ID. When we’re out on the street, we should always be ready to show others God’s mercy. The Latin word for mercy is misericordia, derived from miserere (“pity” or “misery”) and cor (‘heart”). So we’re actually seeking to relieve them of a heart that is in misery. This misery can be caused by sin or some deep hurt from family, friends, or just the struggles of life. Regardless, let’s seek to help relieve them of their misery by showing them God’s love and desire to heal, as the evangelist did in today’s story.

The following report comes from our Boise, ID team:

Several good encounters today. We’ll start with the teen skateboarders. Two members of their group asked me (either seriously, or as a test) just who Jesus is, while other members of the group stood back and laughed at them. But the two seemed genuinely interested, so I offered them my last copy of the Catechism, which they immediately began to squabble over who would get to read it first. They also accepted a map to area parishes and the invitation to check out the (RCIA) classes being offered. Please pray for them.

A Catholic man stopped, and we talked about how he’d been scandalized by the unjust, self-serving behavior of one of his parish’s employees. In fact, he said that he was tempted to give up on the Catholilc Faith itself! I asked him to not turn his back on Jesus Christ and the Sacraments because of Judas. I also asked him to start praying, “Father, I forgive him. I ask you to forgive him, too, and save him.” My visitor, who now seemed to have regained some peace over the matter, agreed to begin praying that way. Please pray for all those involved.

A woman, perhaps in her 50s, with very short gray hair, passed a couple of times. She’s gone by us before, either frowning deeply or saying something angrily. This time, the first time I offered her a rosary, she replied as she strode past, “You’ve got to be kidding me!” She came back by a bit later. This time she said, again without breaking stride, that she was sorry I believed all the nonsense I represented. Please pray for her? At least she’s talking to me now, instead of striding by with just an angry “No!” Plus, her reply even showed an attempt at charity! May God continue to soften her heart and lead her to Himself!

Praised be Jesus Christ! In today’s story, we saw someone who was struggling to forgive, and another who was hard-hearted towards the Catholic Church. What was the response? Simple. To show them the love of God and pray. The virtue of Prudence will indicate how we show them love…whether through a compassionate word, a listening ear, a reminder that we are forgiven as we forgive others, or whatever God may inspire us to do.