“Blown Away by God’s Presence” 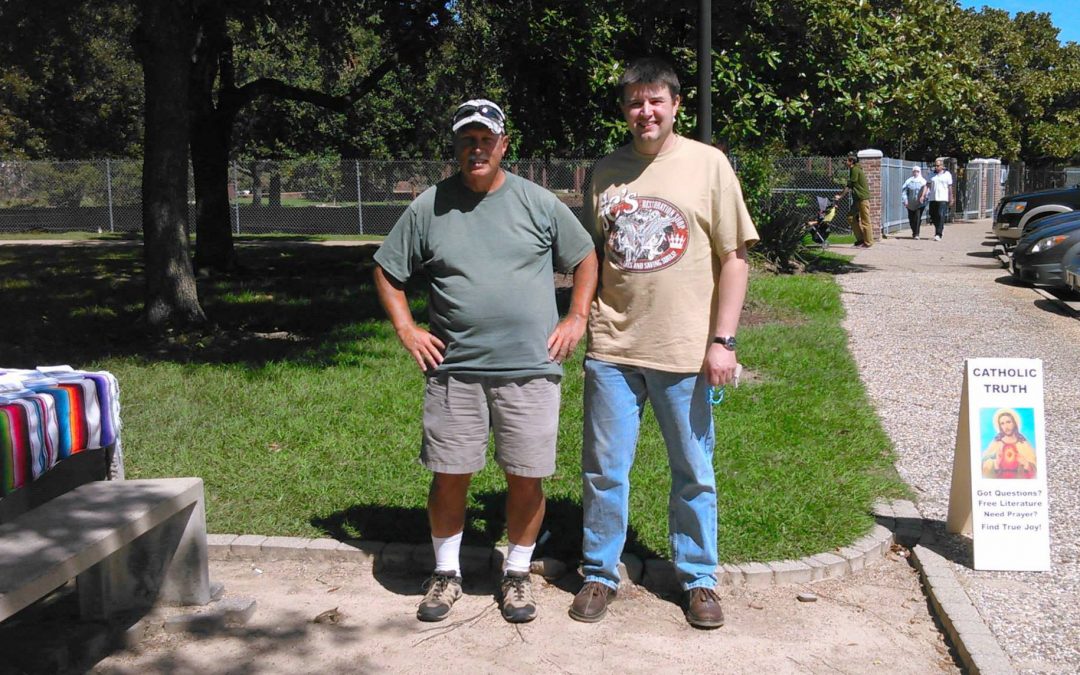 Houston, TX. Often we go out to share the message of the Gospel and sacrifice a few hours of our time and energy. But in return we receive so much more from God than we gave! Today’s story is a perfect example of that.

The following report comes from Brian and our SPSE team in Houston, TX:

This Saturday we started out at about 9 AM with Stefan, Carlos and his two daughters, Iris and Irene, and myself. Before we had finished setting up the table, a man named David approached our table, asked for a rosary, and asked that we pray Psalm 23 for him – The Lord is my Shepherd. After we prayed for him, and then as a group to start out the day, Iris took off with a handful of rosaries to give away, and I was shocked when she came back within a few minutes with her mission accomplished!

The morning started with a slow flow of traffic coming through, a few rosaries given out, and a few good conversations (including one with a woman, Parneet, who didn’t know anything about Christianity). Then James showed up, like myself coming out for the first time. Shortly after him were Megan and Alex and the team was complete!

Once we had enough people, Stefan went to sit on a bench and intercede for the group by praying the rosary. Within minutes of Stefan starting to pray, we had a whole group of probably about 50 people walk through on a walk to raise awareness and funds for those who are blind! I think every single one of them received a rosary from Iris. We offered to pray for them, and even told testimonies of God’s healing blindness through prayer, but none of them returned after the walk to receive prayer. But praise be to God, we will pray for them all!

At one point in the middle of this sea of people, I found myself in a moment of silence able to soak it all in. Iris was handing out rosaries by the dozens to a group of teenagers, Megan and Alex were building a relationship with a teenager in foster care that has no family in the US, James was praying with a man whose granddaughter was blind, Carlos was having an encounter with a small group, and Stefan was interceding on the bench. Wow. In this small moment, I was blown away by the sheer presence of God. This small moment spoke volumes to my own heart about being human. So many people, and so many stories. All of us made for and seeking God. The small sacrifice of showing up today opened the door of so many people’s hearts to God today, including my own.

At the end of the day we handed over all of our time, our encounters, conversations, and prayers to Jesus through Mary. All praise and glory to God, who bears abundant fruit as we abide in His love.

Praised be Jesus Christ! When we give of our time and of our self, God always outdoes us in generosity (whether our reward is here on earth or in heaven.)