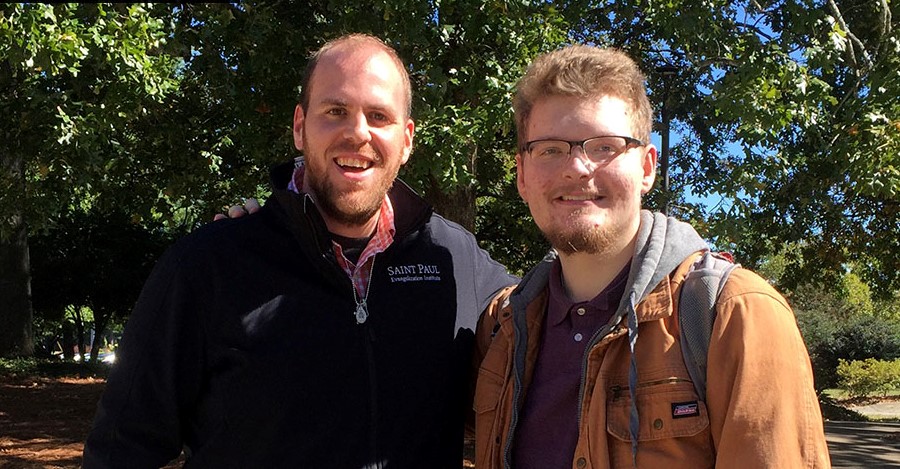 Atlanta, GA.  Every once in awhile, we meet someone who accepts the truth we are attempting to share with them, is ready to go to Mass, and wants to change their life now. It’s wonderful to be able to witness someone who is primed for God’s plan.. That was the situation in today’s story. God had obviously been working in this young man’s heart, and he had allowed the work to take place. It’s never a matter of God not trying to help us…but if we accept His help and His will.

The following report comes from Brian and our SPSE team in Atlanta, GA:

Today I had the opportunity to evangelize on a local college campus. It was my first time there and I had no idea what to expect. Our team was set up outside the student center and as I walked up I noticed the team was already set up and four evangelists we already in very lively conversations with students.

One of the evangelists, Ashawn, was speaking to two young men. One of them was named Christian. Christian mentioned that he was baptized Catholic but that has never really practiced his faith. He was in a place now where he felt like he needed to go to Church and allow God to enter his life.

I shared the Gospel with him and let him know that our faith isn’t only about being a good person, but it’s about accepting the invitation to a relationship with Jesus and living in communion with God and being open to His will for our life. Christian mentioned that his life felt directionless and that he would like to know God’s plan. I invited him to go to Mass with me and he accepted! We exchanged contact information and he said he will meet me for noon Mass.

Before he departed I gave him a Miraculous Medal. I told him the history and graces that come from wearing the medal and offered to pray with him. He asked if he had to do anything and I told him that all he had to do was receive. After prayer, it was obvious that he had been touched by God and he left letting me know that he will see me on Sunday. Later he returned to the table asking if we knew of any local retreats or retreat centers he could go to in order to give God more of His time.

Praised be Jesus Christ! It appears another soul has returned to Our Lord and His church. Please keep Christian in your prayers as he continues to attempt to turn his life back to God.