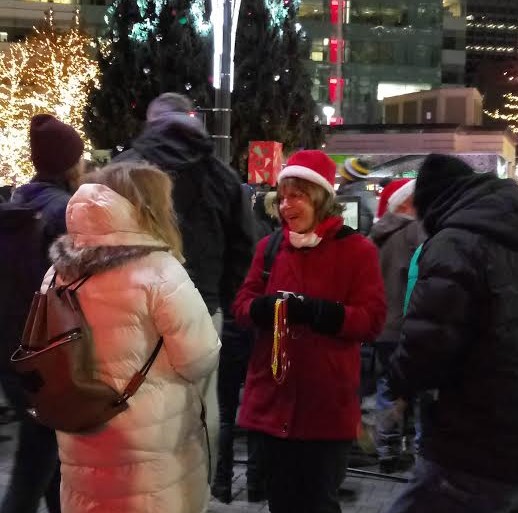 Detroit, MI. The 16th Annual Christmas Tree Lighting took place in downtown Detroit at Campus Martius this past Friday. Thousands of people packed the sidewalks and streets…families with young children, couples, groups of friends and curious onlookers. Events like these are prime opportunities for evangelization.

The following story comes to us from evangelist Beth, our Associate Director of Teams at the SPSE national offices in Warren, MI:

Four evangelists made it out to the event: Beth, Bob, Mark, and Mike. The crowd was quite large for the tree lighting and opening of the public ice rink. Unfortunately, we weren’t able to set up a table due to city laws, so we walked around and struck up conversations. While many we chatted with had some belief in God, most were irregular in their practice or not practicing at all. We handed out all of our rosaries in a short amount of time.

We had quite a few good encounters, but one that stood out is when I stopped to talk with a group of four. After some light conversation with one woman, I told her we were bringing Jesus to the event by handing out rosaries and praying for people which turned our conversation to faith. I asked if she wanted a rosary as she told me she “used to be” Catholic but doesn’t really go anymore. When I asked why she stopped going she responded that she didn’t really have a reason…life just got busy. I listened as she told me about how easy it was to drift from the church in the ’70s. I asked her if she missed it at all. Then I invited her to return to Mass telling her it was not a coincidence that God put me in her path. He really wants her back. She then told me her name was Mary and we both chuckled that since she shares the name of the Mother of Jesus. Of course, God wants her back in church! At that point, her friend, who is practicing her Catholic faith, jumped in and joined the conversation. We all prayed together, and since they were Catholic we prayed the Hail Mary. I even heard Mary, who has been away from the church for years, say the words to the prayer out loud with us! Praise God!

As the group moved on to their next activity one young man who was with them stopped me and asked for a rosary and the How to Pray the Rosary pamphlet. He had stood quietly during the entire exchange, so I was struck by his request. Perhaps praying out loud publicly stirred up his thirst for God. I gave him the rosary and asked what parish he attended. He said he often missed it because he wasn’t sure where to go. So I told him the name of the parish near his home city. I also told him about the Mass times application/website where you can easily find a Catholic parish nearby or search for on by city or zip code. He was so glad to learn how to find a parish nearby no matter where he was. Thank you to Our Lady for her intercession! You never know what can happen when you pray out loud with someone.

Praised be Jesus Christ! Please pray for all we encountered, even if only for a brief few seconds, that their hearts will be touched to either return to the Catholic faith or begin investigating it for the first time.