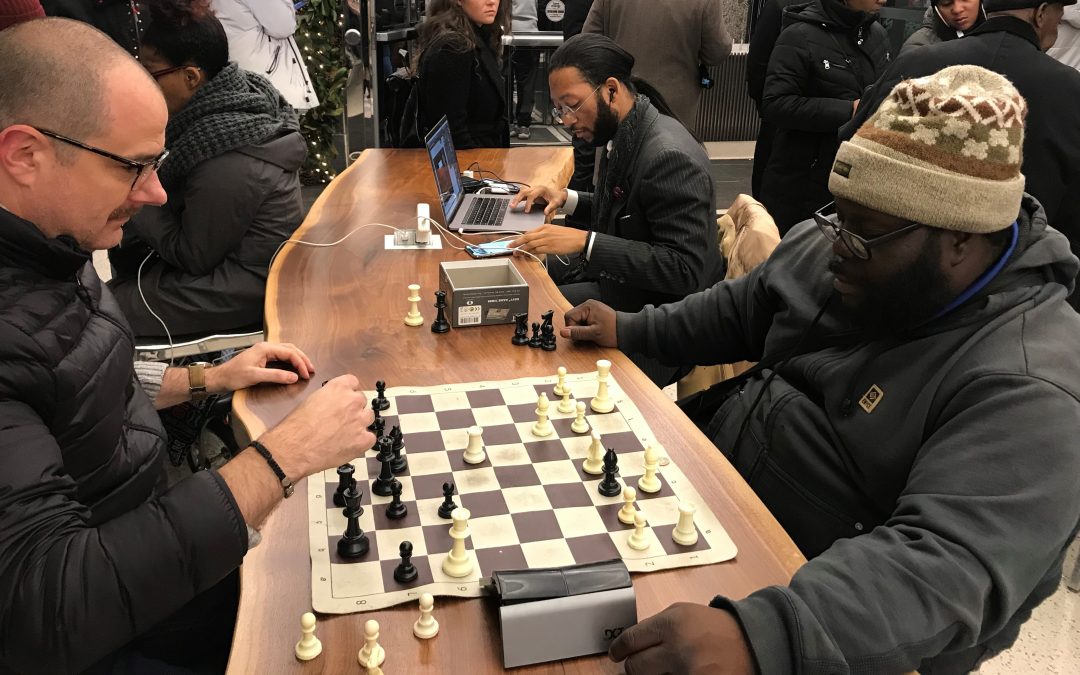 Detroit, MI. When we get the opportunity to evangelize, we must seize it. Today’s story shows us that we can talk about Jesus and the Catholic faith even while playing a game like chess. It was rather fitting to be preaching Our Lord while playing chess (a game where we seek to obtain the king), since the coming Sunday was the feast of Christ The King! As we read in 1 Pet. 3:15, “Always be ready to give an explanation to anyone who asks you for a reason for your hope.”

The following story comes to us from our evangelist Michael at the SPSE national offices in Warren, MI:

After Beth, Bob, Mark and I evangelized out in the cold for an hour or so, Beth wanted to go inside and warm up for a minute. So she stepped away into a building lobby next to a coffee shop where many people had congregated. Among those people were two men playing chess. They play outside during the warmer months of the year, but it was much too cold to play outdoors now.

I came in to find Beth (and to warm up) and took notice of the chess game, as I enjoy the game as well. After watching two men finish a match, one of them invited me to play. I accepted, and began a game of blitz chess. While playing (and getting thoroughly beat!), I took the opportunity to let my opponent know that we were out evangelizing and asked about the man’s faith life. He admitted that he believed in God, but didn’t go to church. We encouraged him to get involved in his faith life again.

While playing, a man named Eduardo and his wife were watching. Eduardo was also a chess aficionado, and afterwards we talked a bit about online chess. When asked about their faith, his wife said she was Catholic, while he said he was kind of a free-thinker. Eduardo studied different religions and expressed a particular interest in Judaism, specifically kabbalah. I gave him my information to play chess sometime in the future since he lives near me, and hopefully to talk more about God and try to lead him into the Catholic faith.

Praised be Jesus Christ! Evangelization doesn’t always go as we plan. Sometimes during a prepared outing we won’t see much interaction. While other times when we aren’t planning it, an opportunity falls in our lap, like in today’s story. May we always be ready to promote Christ (the King) and Mary (the Queen).