“Pray the Rosary, See What Changes” 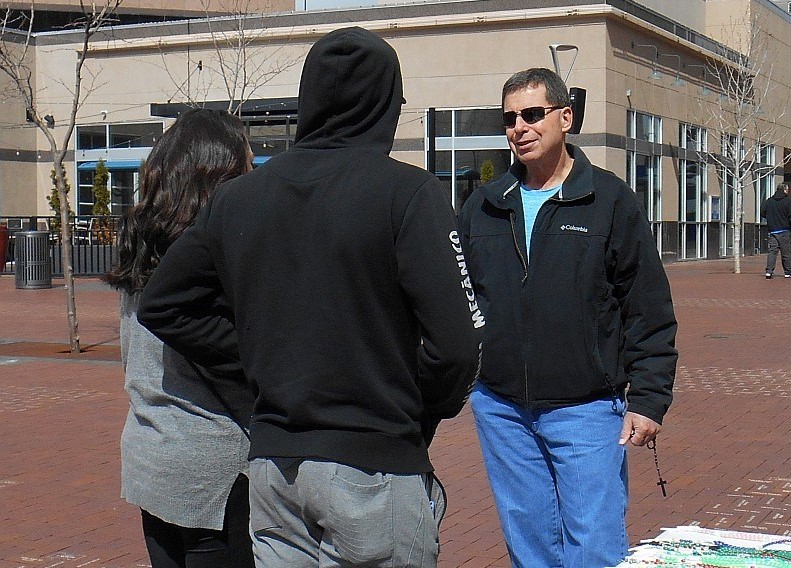 Boise, ID. We hand out rosaries and pamphlets on how to pray it, but how often do we confidently proclaim the positive results that come from it? For instance, the peace that comes from it, the struggles in life that are easily worked out, and the closeness to our Lord and the joy that comes from it. One of the evangelists in today’s story hands out plenty of rosaries, but also issues a challenge to a particular group of teens–pray the rosary and see what happens!

The following report comes to us from evangelist Lucy and our Boise, ID team:

Two evangelists made it out on this particular Saturday. Evangelist Lucy was talking with a homeless man named Walt, a big man approached the table. He also appeared to be homeless, and had one eye closed by a purple and black bruise. He listened as evangelist Chuck explained how and why to pray the Rosary. Then he pointed to a prayer card with a picture of Jesus and asked what it was. Chuck showed him the Divine Mercy prayer on the back and the man gratefully accepted it.

Later on, evangelist Lucy started getting a peculiar headache and remembered that she had forgotten to pray the protection prayers that morning for our apostolate. She pulled a copy of them out and prayed them on the spot. The headache disappeared. Next, some teens stopped by for a rosary. Most admitted to not receiving one before. We tried to ask each group to try praying it once a day from now until Christmas, and see what changes.

One woman, heading to decorate a Christmas tree, stopped. A non-Catholic Christian, she had given her deceased Catholic grandmother’s rosary away – to a relative who didn’t seem to appreciate it. The woman missed having it, but since we had one in close to the same color. She accepted it and the pamphlet.

A woman broke from a family group to choose a rosary and accept a pamphlet. She said she was very familiar with the rosary because she had grown up Catholic but didn’t attend anymore. She said not to worry as she was good friends with Jesus. She didn’t stay to hear our encouragement to return to the active practice of her Faith.

Praised be Jesus Christ! Sadly, some of the rosaries we hand out can just become “stuff” placed in a junk drawer unless we stress the transformative power that this prayer holds. May we try to stress this power to every person we encounter.