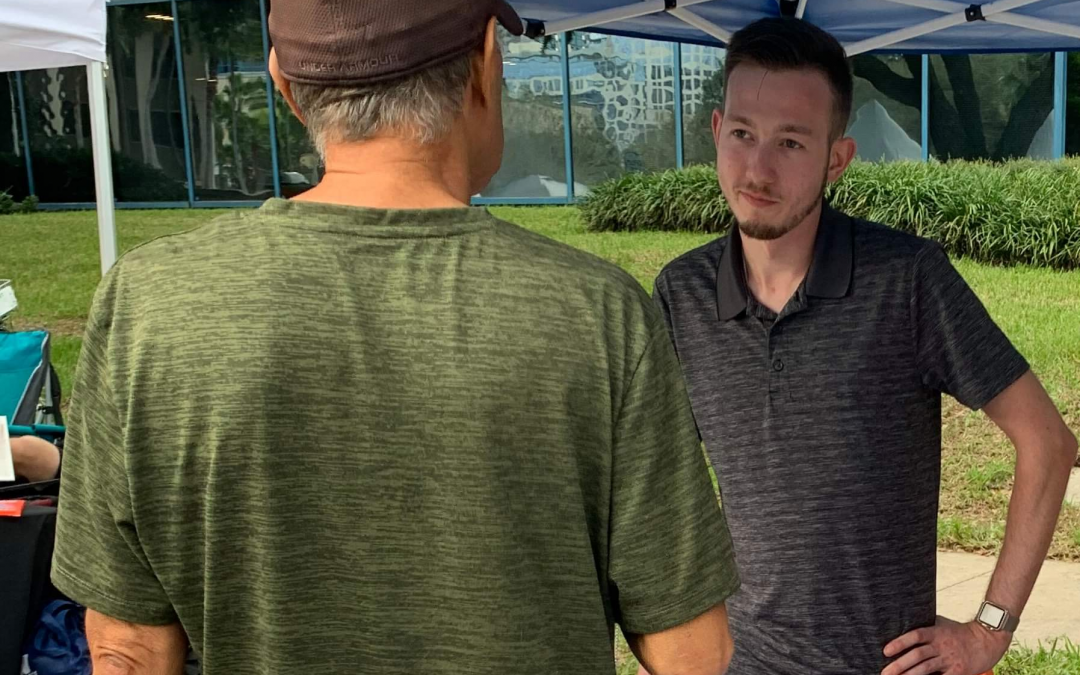 Orlando, FL  Misconceptions or misinformation can easily lead us astray. We must always be on guard against reacting to information if we’re not sure of its accuracy. In addition, we must remind others to be on guard against the same thing. Too often we hear something, and immediately accept the accuracy of the statement and make judgments. As St. John Chrysostom once said, “It is a praiseworthy thing not to be too quick to believe what is not clearly proved.” Thankfully our evangelist in today’s story provided clarity to a woman who had a partially erroneous belief about church teaching on purgatory.

The next day was much cooler (Bless the Lord) as we setup again. We encountered quite a lot more Catholics who were coming out of Mass including some of our friends. They were very happy to see us out with a table representing our faith and took pamphlets to learn more about what we do locally. The Spanish materials went by fast as many Hispanic families joyfully came to our table and became excited to see how local Catholics were evangelizing in the area.

One woman was walking by and was interested in receiving a rosary. She told me that she was raised Catholic, to which I asked if she attended any local parishes. She said that she was no longer practicing and that she didn’t agree with some of the things the Church proclaimed. I asked if she could explain, and that I’d gladly listen to what she thought. She shared about her childhood younger brother who passed away when he was two days old. She couldn’t believe that the Church was cold enough to not allow him to have a Catholic funeral. She did not agree with the fact that her younger brother could go through purgatory either since he was only two days old. She was sad sharing this and I knew it was a deep wound that she had for a long time, so I comforted her and told her how incredible God’s love was for her and her brother.

I asked the Holy Spirit to guide me in my words, and gently explained to her the reality of our souls as proclaimed by Jesus Christ. I explained how God is merciful to all, and how Catholic funerals were created out of reverence to the bodies of those who had been baptized. Because of the great gift of the sacrament of Baptism, we are cleansed of all of our sins, including what is known as Original sin. This mark of Original sin is serious because it separates us from God, which is why Christ was sent into the world to free us and be with God again for eternity. While the Church could not “officially” proclaim that her younger brother was saved due to original sin (he was not baptized since he was so young), the Church recognizes that God is not bound to his sacraments and we are called to pray for the souls of our loved ones with confidence in God’s mercy. Her brother may have gone through purgatory, not because of any sins committed, but as a cleansing from original sin that would perhaps last only a moment. Then he could be reunited with God for eternity. I could tell that she was listening attentively so I gently offered to pray with her for her little brother in thanksgiving for his life to which she accepted. I prayed with her in gratitude for his life and the love that God has poured out into her life, and I ended with asking the Holy Spirit to come and heal any wounds and comfort all sorrow. She thanked me with tears in her eyes and I gave her some materials to take with her as she left.

Praised be Jesus Christ! We would do well to remember the words in Proverbs 8:12: “I, wisdom, dwell with prudence, and I find knowledge and discretion.” It is not a sin to confirm a statement that you’ve heard, especially on such an important topic like purgatory. Gently reminding those we encounter on the streets to “Trust, but verify” (famous Russian proverb) is a praiseworthy thing.