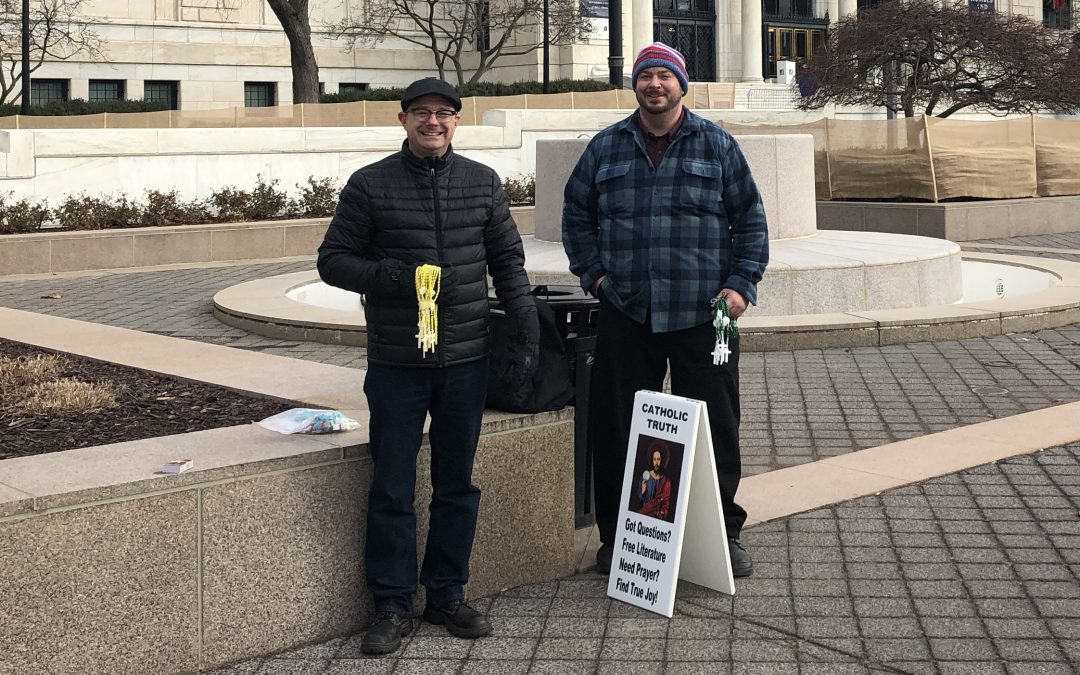 Detroit, MI. The Detroit Institute of Arts, or DIA as it’s known to locals, is ranked as one of the top six art museums in America, and draws visitors young and old. It contains many beautiful religious works, including Gozzoli’s “Madonna and Child” and Jan van Eyck’s “Saint Jerome in His Study” just to name a few. Today’s team decided to set up just outside the main entrance, to see if they could talk to people coming from and going to the museum, and perhaps catch some of the early crowd for Noel Night (a Christmas holiday open house in the cultural center of Detroit).

The following report comes to us from evangelist Mark with the National SPSE office in Warren, MI:

Cindy, Michael and I evangelized in midtown Detroit for an hour on a recent Saturday. The afternoon got off to a slow start—there were few pedestrians passing by and even fewer people willing to stop and talk. After a slow 10 minutes, we moved half a block, near the main entrance to the Detroit Institute of Arts (DIA).

Almost immediately after we moved, a large, extended family stopped and talked with us. They all received rosaries along with pamphlets and a brief explanation of the prayer.

Cindy and Michael had a lengthy conversation with Franco, a native of Mexico. Michael offered him a Gospel holy card, Franco accepted and offered his personal Our Lady of Guadalupe card in return. Franco showed us his many sacramentals, including two scapulars that he received at pilgrimage sites in Mexico. Franco has lived in the Detroit area for years but has not found a parish home yet. I recommend a parish near his home that has weekly Spanish Mass.

We spoke to about 30-40 people over the course of an hour and about a third of them stopped to talk with us. Several people were too busy to stop but did thank us for our presence and our non-confrontational approach. We wished “Merry Christmas” to everyone we spoke with.

Praised be Jesus Christ! Please pray for everyone we evangelized today. Stay tuned for part two of our story tomorrow.