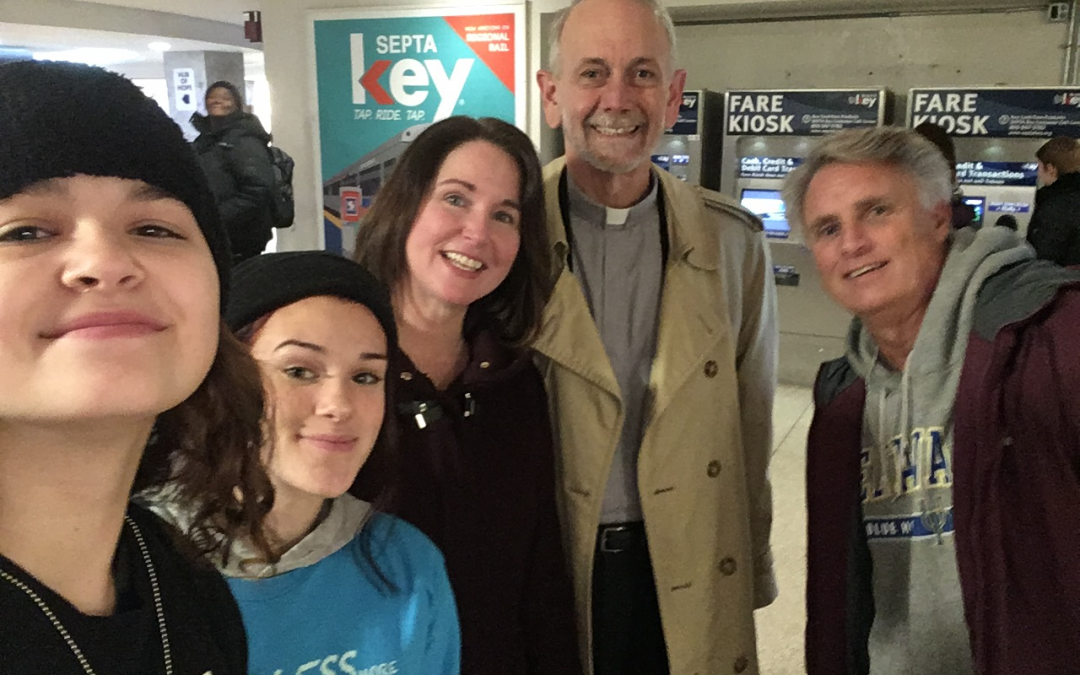 Philadelphia, PA. When you’re doing something for Our Lord, and it’s not easy, He knows that and will reward you accordingly. Today’s team went out in cold, icy conditions, all for the salvation of souls. God blessed their time in the harsh conditions with many conversations and hopefully some conversions.

The following report comes to us from evangelist Nancy with the Lower Bucks team in Philadelphia, PA:

Nancy and Deacon Mark attended Mass at Saint Christopher’s Parish in NE Philadelphia at 8 AM before heading downtown to the Cathedral parking lot. It was chilly enough that the parking lot had black ice and caused Nancy to slip as she emerged from her van, so we opted to go to the warmth and shelter of nearby Suburban Station. It sometimes takes a bit of effort for us to go out and evangelize in less than optimal weather, but the Lord never fails to reward the sacrifice of our time, especially in this very busy season of Advent.

It took but a minute after setting up our station to receive our first visitors, and we had many wonderful encounters over the next 90 minutes. We met Ronnie, a 50-year-old man who lost one child from a birth defect years ago and whose 26-year-old son Shawn is currently in jail for nine months in Norristown for violating his parole. Ronnie himself had to clean up his act as a young man and is now a fervent Christian, and has an impressive knowledge of the Bible. He accepted a crucifix and prayed with us for Shawn. We also met Rhoda, a well-educated woman in her 50s who formerly worked as a counselor and educator, and who has been homeless for 13 months. She is polite, well-spoken and kind, and it was shocking to listen to her pour out her story. She was housed for a short time in a government shelter but the landlord made life miserable for her and forced her back out onto the streets. After a lengthy conversation, Deacon Mark took her to Dunkin Donuts a few feet away and treated her to breakfast, as she had not yet eaten.

During our last encounter in the train station, we met a middle-aged man with two teenage girls. They were from a Methodist church in Delaware, but had spent the night in the basement of a church in Roxborough before heading downtown today to help feed and clothe the homeless in center-city Philadelphia. They originally walked past our stand after we wished them a happy advent, but the girls convinced their chaperone to come back and talk with us. They were all very kind and personable, and accepted the crucifixes that we gave them before joining in a huddle to pray for our missions. How blessed we all felt as we parted ways with a renewed sense of purpose in our various efforts to bring the good news to the poor and oppressed!

Praised be Jesus Christ! These stories were just the tip of the iceberg. Please pray for all the other intentions not listed here…there were just too many to mention.