“A Billboard Pointing to Christ” 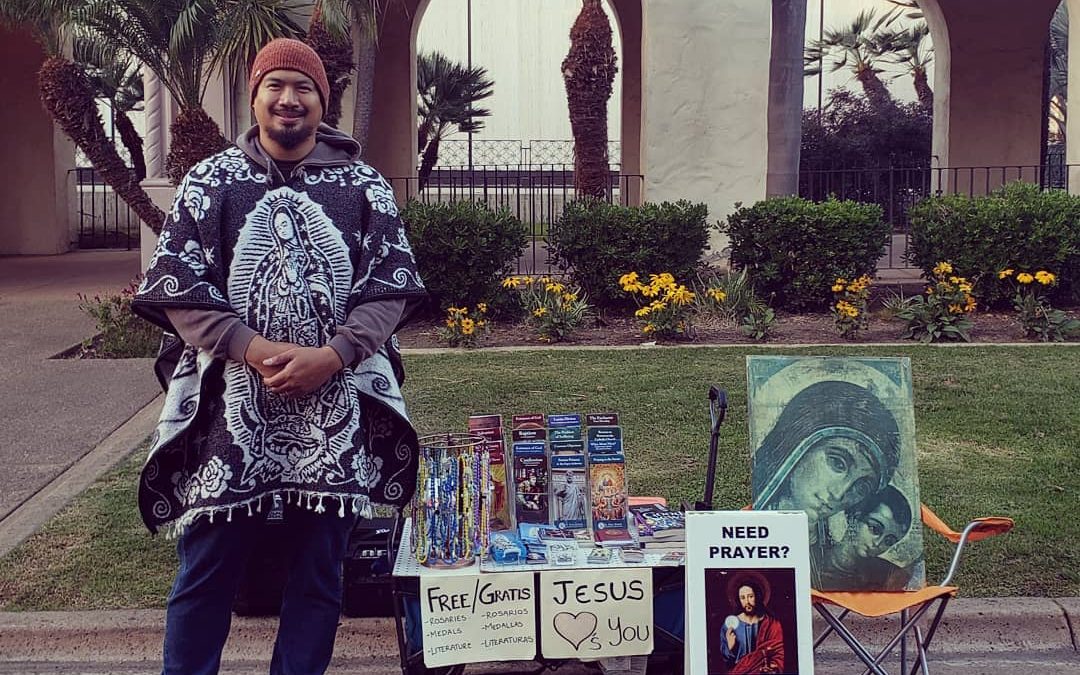 San Diego, CA. The tilma worn by St. Juan Diego almost 500 years ago on a chilly December morning became something so much more after Our Lady of Guadalupe visited him. This poor Indian widower’s tilma has become a relic, a work of art, and a sign pointing to the Blessed Virgin Mary, who points us to Jesus. While it’s highly unlikely that our clothing will one day turn into one of the most revered Catholic relics in the world, we can certainly point to God through our dress. Whether it’s in our modest dress, or in a more direct approach with Catholic slogans on our t-shirts and sweatshirts, it’s one of the easiest ways to evangelize.

The following report comes to us from regional missionary Reggie in San Diego, CA:

I went out evangelizing in Balboa Park on an unusually cold day in San Diego. I spoke to a few people but didn’t have any dramatic encounters. However, I don’t worry about that. I just try to show up. You never know what effect your presence alone can have, even if I just stand there like a billboard pointing others to Christ.

Speaking of billboards, I think it was a hope to perhaps get a conversation started by wearing this tilma in honor of Our Lady of Guadalupe, whose feast was just the day before. Like I said, no dramatic encounters, but I’m hoping my tilma got some people’s attention and somehow planted some seeds.

Praised be Jesus Christ! Clothing pointing to Our Lord or Our Lady can be a great way to start a conversation on the streets. We can become a walking billboard for Jesus like today’s evangelist.