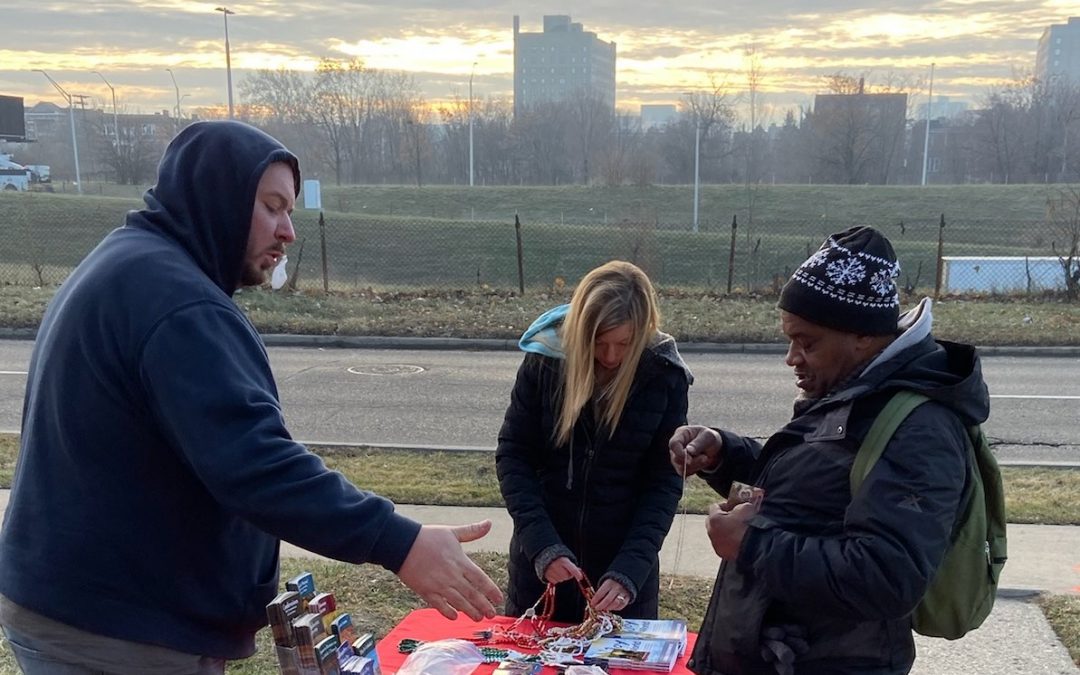 Detroit, MI. For the second year, Our Lady of the Rosary Parish, in Midtown Detroit, organized the “Holy Family Christmas Store”. On the weekend before Christmas, this “store” offered a chance for low-income families to come and receive Christmas gifts, clothing, toiletries, etc. Like last year, our evangelists were invited to come and evangelize the 450 families who registered for the distribution.

The following report comes to us from evangelist Mark with the SPSE National Office team in Warren, MI:

Early Saturday morning, while we were still setting up our table and before we even did our opening prayer, Cindy offered a rosary to a man passing by. Karl, who was just walking to the corner store, accepted the offer and approached our table. He moved to the neighborhood two months ago and is looking for a church home. Karl grew up near the Cathedral of the Most Blessed Sacrament, a few miles away, and spoke about his childhood memories of playing basketball at the cathedral. He was very open to everything that we had to say and asked several good questions. Karl asked me “what’s the difference between Catholics and Baptists?” I explained to him that there are several differences but the two biggest differences are Apostolic Tradition and the sacraments. I told him that, as Catholics, we can trace our lineage to the Apostles but John Smyth started the Baptist Church in 1608. I explained to Karl that Baptism is one of seven sacraments in the Catholic Church. I told him that, even though they call themselves “Baptists”, most Baptists believe that Baptism “is not necessary for salvation.” I continued and spoke about the True Presence of the Eucharist and the Last Supper, when Jesus told the Apostles “this is my body”, “this is my blood”, and “do this in memory of me”. Since Karl comes from a Christian, biblical background, I was careful to refer to the Bible in all of my answers.

Karl spoke about how he is working part-time at a nearby gas station and has little discretionary income. I introduced Karl to Fr. Marko, who was standing nearby. Fr. Marko is one of the priests who lives in the rectory and he runs Better Way Detroit, a ministry that offers day labor jobs to those who are unemployed or underemployed. Fr. Marko recorded Karl’s phone number and promised to follow-up. I told Karl that the parish church is open every night, and gave him an open invitation to come and visit whenever he can. Karl spoke about how he misses his daughter and grandchildren who live in South Carolina. Unfortunately, he is able to visit his family only once a year and he would not see them this Christmas. Cindy, Fr. Marko and I prayed with Karl—we prayed for Karl, his daughter and his grandchildren. I gave Karl a postcard from the parish and invited him to Mass on Christmas Day. In total, we spoke to Karl for about half an hour before we parted ways and he continued his errand. Please pray for Karl and all of those are searching.

Praised be Jesus Christ! Make sure to check out more stories from this outing in the coming days. And please pray for Karl and all those who are struggling in life.