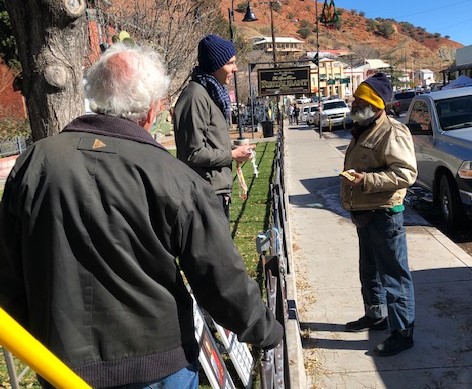 Bisbee, AZ. The Copper Queen Hotel in Bisbee is the longest continuously operating hotel in the state of Arizona. An interesting fact about the hotel–it has never been closed, and their swinging double doors in the lobby don’t lock, always welcoming guests! Kind of like Our Lord…always welcoming those who are astray to come back to Him.

Click here to read more stories from our team in Sierra Vista, AZ

The following report comes to us from evangelist Ed with the Sierra Vista team in Arizona:

We went to Bisbee to evangelize on Sunday and had a lot of success. Ed, Robert, and Terry set up in the park outside of the Copper Queen Hotel in Bisbee for a couple of hours on Sunday. We started out slow but then a guy came up who called himself “411” and wanted a rosary. Robert spoke to him and asked if he was in God’s grace now. 411 said probably not. So Robert told him about the Grace of God and how it can change your life. 411 took many brochures and a Miraculous Medal too.

We gave out about 50 rosaries and about 75 Miraculous Medals. There was a lady who was active in a Catholic Church that Terry knew but she was not attending Mass now. We told her about the benefits of living a longer, happier healthier life if you attend Mass every week because studies back this up. She took the paper on the studies and said, “OK, I will start going again.”

We spoke with Hispanic families and gave them many of our Spanish brochures and also a man who went to high school with Robert. He took many brochures and Miraculous Medals and a rosary and how to pray it. He indicated he needed to get back to Church. There were others we gave brochures, medals or rosaries to that were very thankful. We prayed a Rosary for everyone we spoke to or who passed us by and did not take anything on our ride home.

Praised be Jesus Christ! Lives are changed forever when they encounter the Living God. Beg God for more chances to meet souls on the street (or wherever He wills) so we may introduce them to the goodness of the Lord.