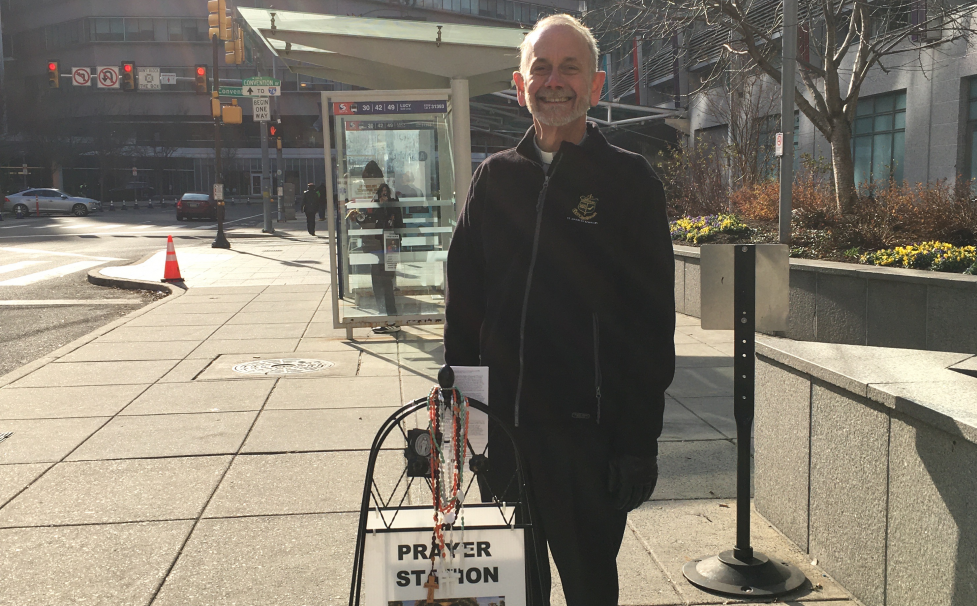 Philadelphia, PA. Having health problems can be kind of like a slow “martyrdom.” It can cause physical pain, lack of mobility, depression, weight gain, and a variety of other problems. So it was rather fitting that today’s team set up outside two hospitals on the feast of St. Stephen, the protomartyr of the church. While these ailing souls certainly are not suffering for the faith like St. Stephen, nevertheless they have their own crosses to bear. They should be informed (or reminded) that their suffering can bear great fruit if they unite it to the cross of Jesus Christ.

The following report comes to us from evangelist Nancy with the Lower Bucks team in Philadelphia, PA:

On the second day of Christmas, Nancy and Mark headed downtown to engage in street evangelization in front of Children’s Hospital and the Hospital of the University of Pennsylvania. We had not been there for at least eight months, as the area was being reconfigured and was not conducive to meeting with people at that time. The weather was a bit chilly but at least initially, there was abundant sunshine and light winds, so the conditions were bearable. During our 90 minute session, we were able to reach out to several dozen people, some who merely accepted a religious medal or crucifix because they did not have the time to stop and talk, but others spent some time with us to discuss their problems and then pray over their circumstances.

Setting up near the hospital, I guess it makes sense that we encountered many people with health problems. We met Frankie, who was just released from the hospital and wants to fully recover his health. We also spoke with Darryl, whose is providing home care for his wife Dolores, who is to be released from the hospital with a feeding tube. There was also Joe, whose sister-in-law Caroline is suffering from Stage 4 breast cancer and has multiple metastases. Next was Sharon, who is going in for testing prior to cancer surgery scheduled for January 29. This is her third bout with cancer and she is understandably very scared. That was followed by Maria, whose 2.5 month old granddaughter Harlow, is in Children’s Hospital with Surge-Weber syndrome and suffering from seizures. And then there was Cyril, whose sister Molly is in the hospital with end-stage breast cancer. All would appreciate your prayers.

We also met Rosita, whose son Terry is struggling with drug addiction and trying to wean himself off methadone. In addition, please say a prayer for Tiffany and her children, Karima, for a better 2020 and her son Zafir in Chicago, Anthony and his finances, and Michael and his sons Cole and Louis.

Praised be Jesus Christ! May God bless you and your families during this most holy season of Christmas and in the coming new year. Please remember to pray for all the sick and suffering souls, that they may be healed if God wills it. But more importantly that they may encounter the Living God and grow in relationship with Him.