“Too Tough To Die” 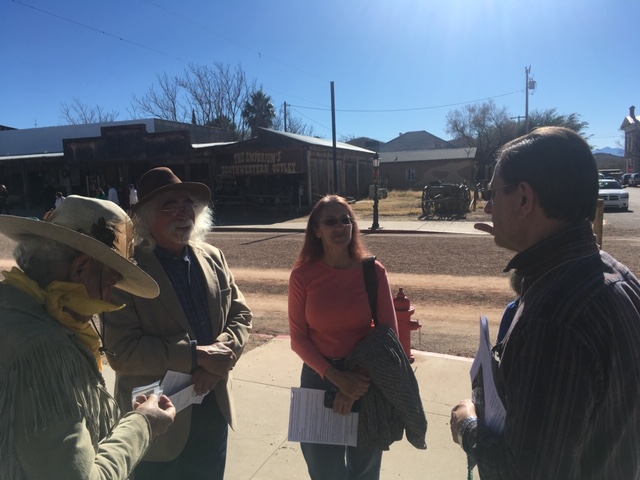 Tombstone, AZ. Many cities have slogans or mottos associated with them. Sometimes for positive reasons, and sometimes not. The city that our evangelists visited in today’s story is known as “the town too tough to die”–Tombstone, AZ. That phrase likely comes from its Old West mining days when men would settle their disputes with their guns. (The most famous gun battle took place at the OK Corral back in 1881.) There is a grittiness and toughness to this historic town and perhaps some of its people. But however tough we think we are, everyone always needs the saving power of Jesus Christ. Without it, no matter how strong we may believe ourselves to be…we’re nothing.

The following report comes to us from evangelist Ed with the team in Sierra Vista, AZ:

We went to Tombstone, AZ to evangelize on the Feast of the Epiphany. Ed, Terry, Robert, and Fredda were there. We had a warm sunny day in Tombstone–70 degrees! We handed out 50 Miraculous Medals and about 100 Rosaries and got to speak with many people.

We first met Jose and Debbie. Jose was Catholic then went through a divorce, quit going to Mass, and moved in with Debbie. Ed and Terry told him about how much God loves him and wants him back. Ed gave him two brochures — one on Returning to the Catholic Church and another on sexual purity. We also gave him a rosary, Miraculous Medal and scapular.

Robert spoke with a man named John who had work done on his shoulder and had his arm in a sling. He told us he was a Christian mutt and did not belong to any one religion. After speaking with him a while, John asked for every pamphlet we had. Ed gathered each of the 27 pamphlets and a few others and he took them all. He asked for prayer and we all prayed over his shoulder and asked Jesus to heal him. He wanted to talk for a long time and we did speak with him in shifts.

A lady and her husband from Tucson came by and asked it she could donate to our cause. We told her to go to the website to donate and she took one of our flyers which lists everything on the website. She was very excited to see us out there. Fredda spoke with the lady as this was Fredda’s second or third time out and did a marvelous job telling her about our ministry. Overall, a wonderful day sharing the Gospel with so many who opened their hearts to Jesus.

Praised be Jesus Christ! While the world sees strength and toughness as a virtue, St. Paul reminds us in 2 Corinthians 12:10 that, “…I am content with weaknesses, insults, hardships, persecutions, and constraints, for the sake of Christ; for when I am weak, then I am strong.”