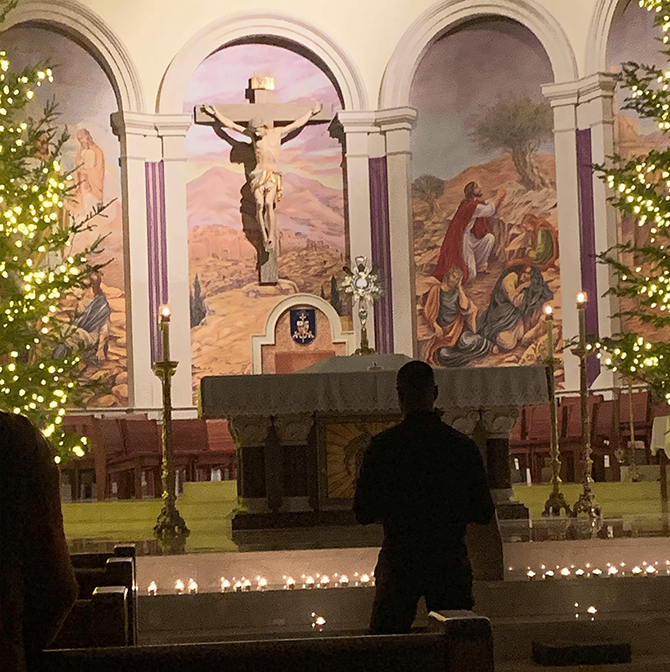 Orlando, FL. Today’s story from the street features NightFever, which is an event that seeks to help those far away from the Catholic Church to encounter God and to experience His love and mercy. This is done by asking volunteers to approach people on the street and invite them to come into a church, light a candle, say a prayer, get prayed over, and have someone share the gospel with them. This event has deeply touched many souls, including the young man from Florida in today’s story.

We helped at an event called Night Fever at St. James Cathedral, which went from 9pm-midnight on a Friday night. Young adults invited people from the local area to come into the cathedral and light a candle. The candles were placed at the front of the altar while the Blessed Sacrament was exposed and people had the opportunity to pray with one of our team members or with a priest. We also had a few people interceding for us through the night. Many people came into the church, but I want to share a story of a man who I got to meet personally and bring into the cathedral.

We had four teams go out to ask people if they wanted to light a candle. I went with two other evangelists to the bar area, and as soon as we walked up I saw a man sitting on the sidewalk surrounded by musical equipment. I decided to go up and talk with him and introduced myself. I asked questions about the music he played and where he was from. His name was Adam and he was a traveling street musician in Florida. He carried two guitars, a speaker, water, food, and camping supplies all on his bike. We had a very nice conversation about music (I also play guitar), and then I invited him to an event that was held in my church only two blocks away. He smiled and said he would stop by but he didn’t want to hold me up from inviting others. I said there were two evangelists who were already doing that and I had the time to wait for him. He seemed very moved by my patience, but denied that he was worth waiting for. I continued getting to know him and all three of us walked with him to the church.

One of the evangelists watched his stuff and I brought him into the cathedral to fill up his water bottles. I asked him if he grew up in any church and he told me his family was Catholic but no one ever practiced. As soon as that was done I walked him inside as he held a candle and began telling him a bit about the cathedral and my daily prayer life both inside and outside the community. He was completely stunned at the beauty of the cathedral and removed his hat. His steps became slower the closer we walked to the front of the altar and I also briefly explained that we believed Jesus was in the Eucharist right there on the altar. I invited him to spend as much time as he wanted to pray as he placed his candle on the steps which he certainly did. When he got up, I invited him to talk with a priest or have someone pray with him but he said he was alright. He had tears in his eyes and I walked him slowly out of the cathedral inviting him to come to any Catholic church as we approach Christmas to spend some time in prayer. He told me how he did carpentry work and really admired the woodwork in the cathedral. Then he thanked me for the invitation and I said goodbye, then told the other evangelist about the experience so that he could continue the conversation and I went back inside to pray for Adam.

Since the other evangelist was a man I figured Adam would be more comfortable opening up and perhaps taking the invitation to heart. After awhile I went back out into the streets to meet more people. It had been another 40 minutes when I saw Adam leaving with his bike! It seems that he had a great conversation with a few of the young adults when I came back and left with a smile on his face.

Praised be Jesus Christ! What a moving event for everyone involved, especially the people who were welcomed into the church. Regardless of the number of people who came in that night, this team rejoiced in the people they did reach because God never misses an opportunity to show his mercy.