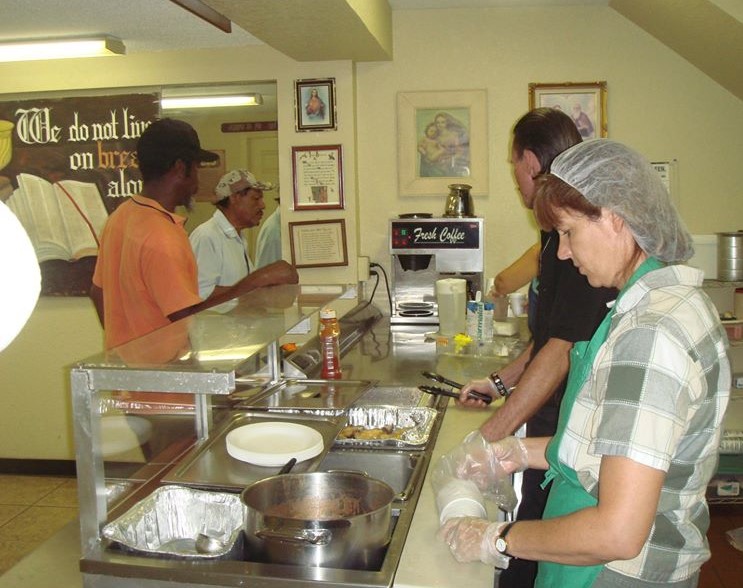 Detroit, MI. Many passages in scripture exhort us to pray always and not lose heart. And it’s a lesson that the man in today’s story from the street certainly learned. Sometimes it can take a potential illness to wake us up to our desperate need for God and His grace. And so we must not only pray always but be thankful to God in all circumstances because He is always working for our good.

The following report comes to us from evangelist Patti and our St. Leo’s Soup Kitchen team in Detroit, MI:

As I walked into the kitchen, Lyon came running up to me with arms open, ready for a BIG hug. He announced, “It’s not cancer!” Last month I had prayed with Lyon after he accepted a rosary and a crucifix from us. Lyon and his doctors were concerned that tests he was scheduled to have would show he had liver cancer. The tests proved that he did not. He was certain that prayer played a big part in the positive results. He wanted to give credit to me for praying with him but I assured him that this is the work of his Savior, Jesus Christ and the Holy Spirit. I told him how pleased the Lord was that he came to Him in prayer and asked him to continue to do that every day. After a few more happy hugs, he assured me that he would continue his prayers. We sat down together and prayed, once again. God is good!

Many of the patrons, came up to our table for rosaries, medals, and most importantly, prayer. Several of them came up with a smile to show that they were still wearing the medals they received from us in the last couple of months.
Praised be Jesus Christ! It is easy to become ecstatic and grateful to God for good news, and at the same time downcast or angry at God for an illness or any negative thing that comes our way. But we must remember the words of St. Teresa of Avila who once said, “In all created things discern the providence and wisdom of God, and in all things give Him thanks.”