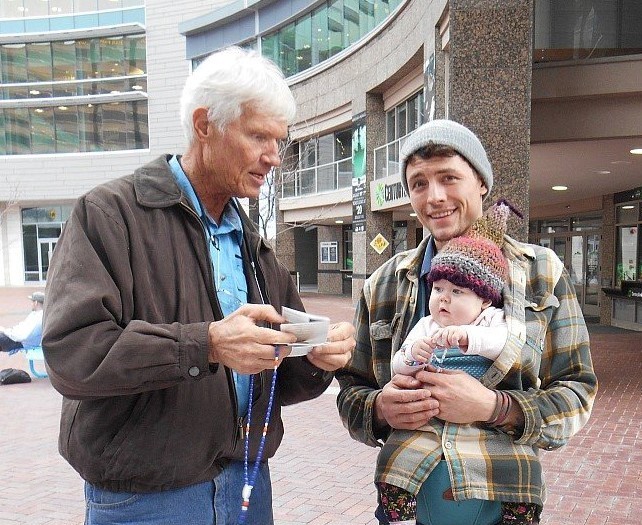 Boise, ID. A good work of fiction can be an escape for many from the hard reality of their lives. However, some choose to never return to the truth, often crafting a reality that’s easier to swallow and allows them to continue in their sins. An encounter in today’s story features a man who chooses not to believe in the truth of Our Lord and His one true Church. In fact, he calls them “fiction”. If he only knew! Thankfully for our evangelists, the truth that they attempt to share with others will stand on its own. As St. Augustine once said, “The truth is like a lion; you don’t have to defend it. Let it loose; it will defend itself.”

The following report comes to us from evangelist Lucy, who heads up the team in Boise, ID:

Two evangelists were available for today’s outing, where we gave away a good 15-20 rosaries and the accompanying pamphlet. There were a decent amount of interactions, but we’ll only focus on a few big ones.

The day started with a man we’ll call “Mr. Fiction.” Evangelist Chuck asked the man who we see from time to time if he had read any new fiction lately, to which he responded, “some magazines.” Then he sharply responded, “I see you’re still peddling your fiction.” Mr. Fiction then walked away. Evangelist Chuck asked, “How do you judge what is fiction or not?” He called back with a sneer, “Intelligence!” May the Holy Spirit continue to widen the crack in the door of conversation with this man.

Next, a group of three people stopped, also in their 20s. The woman spoke with evangelist Lucy, while evangelist Chuck spoke with her boyfriend. He had been baptized Catholic, but did not practice the Faith, nor intend to at this point. Though he loved its theology, he “just didn’t like the Church”. When evangelist Chuck pointed to the Eucharist as the best reason to stick with the Church, as well as being an amazing privilege and blessing that he was missing out on, the man shook his head and repeated that he was not interested in “church” at this point. Some time ago, he had received a copy of the Catechism from us and had been reading it. He told evangelist Chuck that he “found it interesting” and has used it frequently when he had questions. His girlfriend is a non-Catholic Christian and, when they have discussions about religion, they refer to the Catechism. The woman was not at all familiar with the Rosary and was delighted to find out, from evangelist Lucy, that it focused on Jesus. She accepted a rosary and its pamphlet, and seemed to look forward to trying it. May that Catechism draw them both into a full relationship with Christ Jesus in His Church.

Praised be Jesus Christ! The truth can be challenging to digest for some at first, but we all must conform our lives to it…not the other way around. As famous Catholic author Flannery O’Connor once said, “The truth does not change according to our ability to stomach it.”