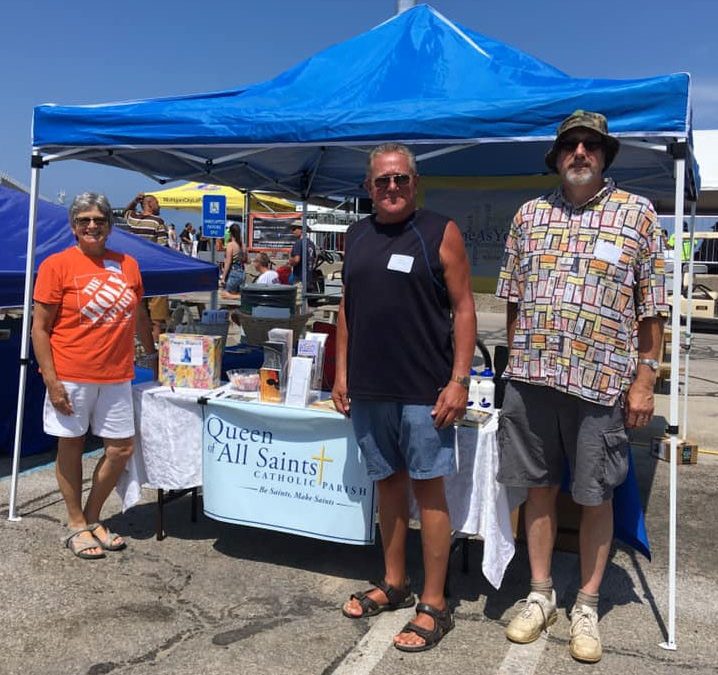 Michigan City, IN. The 12th annual Great Lakes Grand Prix is a free 4-day event, where spectators witness some of the fastest offshore powerboats in the world, as well as AquaX jet ski races. But that’s not all that goes on at this festival. There’s Taste of Michigan City, live entertainment, a boat parade, the Great Lakes Grand Prix golf outing, and a block party. All of these events draw over 200,000 people, which makes it a prime opportunity for our evangelists to talk to people about Jesus.

The following report comes to us from Deby, one of our Michigan City evangelists in northwestern Indiana:

Last August, we (Jessica and Deby, parishioners from Queen of All Saints) set up a booth at the Great Lakes Grand Prix boat race and festival. We gave out many religious medals, Catholic books, and accepted prayer requests from race fans.

We had some engaging encounters during the festival. I know that Jessica’s biggest reward was helping someone think differently about the Catholic Church. She met a Lutheran man from a nearby town who had some misconceptions about the Church’s attitude on welcoming those with same-sex attraction and those who have been divorced. I was glad to let him know that all people are viewed as children of God, first and foremost. I spoke about the hospitality at Queen of All Saints Parish, how we “meet people where they are at”, and he also took several books from our table.

Praised be Jesus Christ! It’s always important to clear up misconceptions about the teachings of the Catholic Church for those who hold those beliefs. We let everyone know that all are called to chastity, not just those with same-sex attraction or divorced. For those evangelists who might struggle to formulate the right words when talking about these topics, make sure to pick up our pamphlets: “God’s Plan for Sexuality”, “Homosexuality”, “Marriage and Annulments” and “Confession”.