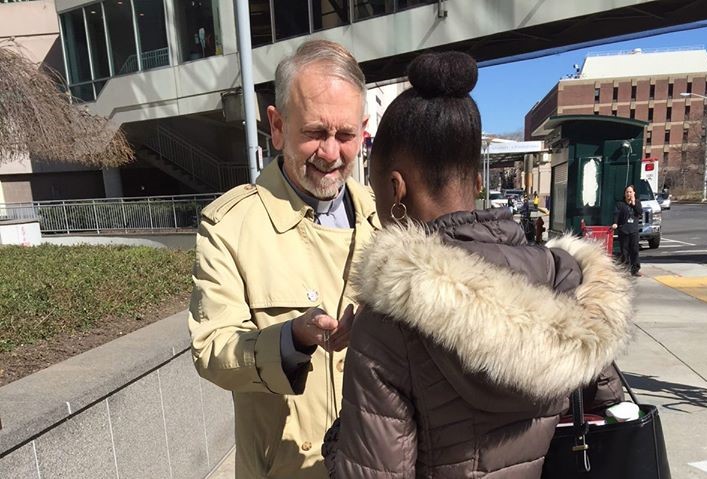 Philadelphia, PA. Today’s story is the second part of a two-part Story from the Street.

The following report comes to us from evangelist Nancy from our Lower Bucks team in Philadelphia, PA:

A fellow named Jerrold was talking at length with Deacon Mark. He was a giant of a man, so we asked if he played football back in high school. Jerrold said he was the musical type, not athletic. Then he shared how he once had a home but had given in to great anger, feeling hate for a boarder at the house. In his hate he burned his home down and now was homeless. Jerrold told of how he had been raised a proper Christian but turned away from God and now realizes how far he fell away. He said he repented and was so very sorry and wanted nothing but God’s mercy. We asked him if he was going to get himself to Mass or services the next day, Sunday, as it was the Lord’s day. He told us that he played keyboard and was playing at a Pentecostal church the next day for their services. He said it was a nice job for him, that he got a little work and got to serve God altogether.

Deacon Mark had to run to the lavatory, so I began making conversation with Jerrold. I asked if he prayed in tongues and would like to pray. Jerrold said “yes, but it’s not like it is something that you can just command”. But then he said “oh, actually I do want to pray” and then he was praising God in tongues. I prayed my prayers with him too, yet tongues never seemed to come to me, but Jerrold’s prayer and Hallelujahs and Amens in there were an amazing and surprising blessing! After a few minutes we opened our eyes and found our little prayer station surrounded by five people who all wanted rosaries and prayer cards. Jerrold exclaimed “look at that, as soon as we prayed all of those people came around”. It really was astounding. We didn’t have that many people around the whole time we were there, until Jerrold prayed in tongues. He remained with me and Deacon Mark for awhile longer. Jerrold said several times that this prayer was just what he needed and that he felt so good. He said he had seen us and felt strange coming up and speaking with us but he knew he needed to, and now he knew why. Praise God!

Praised be Jesus Christ! Just like Jerrold in today’s story, sometimes we feel called by God to do something even though we don’t understand it or feel strange doing it. He set such a good example for all of us to obey those subtle suggestions that we sense might be from God (unless it is imprudent, something that is blatantly contrary to reason, or sinful).