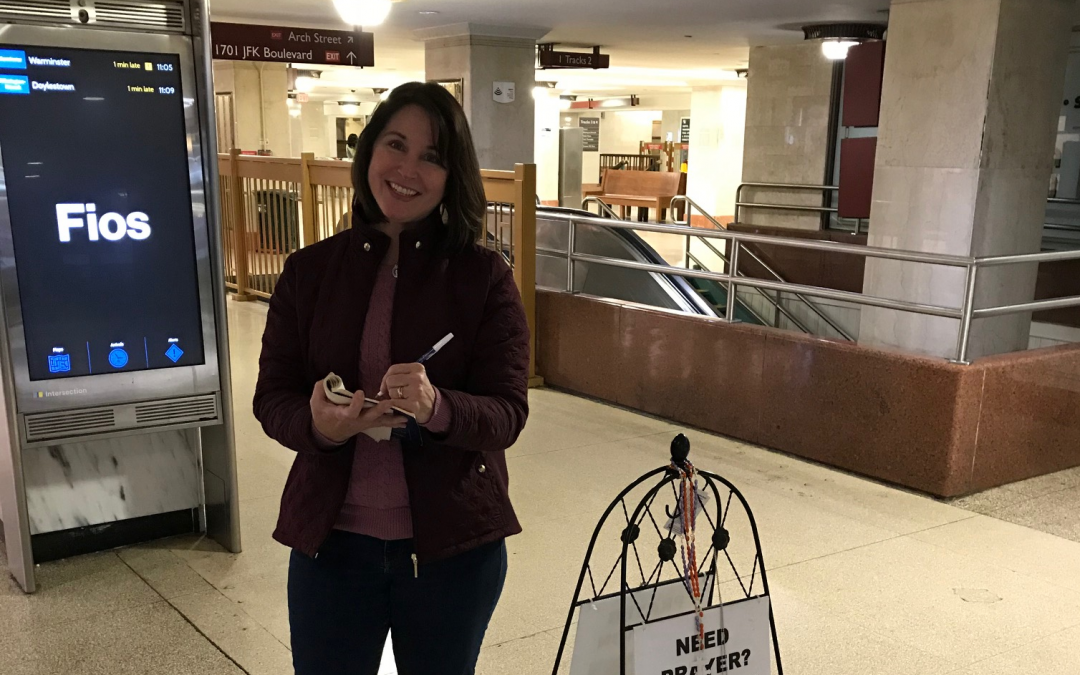 Philadelphia, PA. How wonderful it is when those we talk with on the street are willing to accept prayer. So many things in this world come with “strings attached.” But the prayer we offer is essentially a free gift from our loving God. Who wouldn’t want that?!

The following report comes to us from evangelist Nancy with the Lower Bucks County team in Philadelphia, PA:

Nancy and Deacon Mark headed downtown, once again to Suburban Station, to get out of the February chill. Our little team was blessed to speak and pray with many people. While we met many homeless people, seeking shelter in the warm dry station, we also met quite a few people commuting into town.

An older man named Will was heading out towards the exit. He was wearing hipster looking sunglasses, with long hair that was tidy and trimmed. Nancy asked him if he could use a prayer. Will stopped and said “Sure! Who couldn’t use a prayer?” He spoke of his special intention, for his eyes to be healed. He said that he needed to wear the sunglasses because he had an eye condition that was painful and difficult. Nancy asked if it was alright to touch him, and Will took his gloves off so that his hands could be held. We asked the Lord to hear and answer our prayer for Will’s eye condition to be completely healed in Jesus’ name. Asking Will if his eyes felt any better, he said that yes, the spasm had mostly stopped. Upon hearing this good news of God answering our prayer we continued and prayed for Will’s complete healing of his eye disease and ailment. Will mentioned that he was a Catholic and that he thought it was a wonderful thing that we were out there in public praying with people and reminding them of God’s presence in their lives and in our world. We gave him a postcard detailing the upcoming Alpha at Nancy’s parish, with email address, in case he would like to try and come to the Alpha or get in touch. We hope and pray that we will hear from him that God has completely healed Will’s eyes.

A man was purchasing tickets at a nearby machine and his wife was waiting. We asked her if she could use a prayer. We got another “Who can’t use a prayer?!” Upon asking if she had a special intention, she started to tear up and told us that she needed prayer for her son Eric. While she didn’t get into the details, Dcn. Mark and Nancy assured her of God’s great mercy for her son and her suffering as a mother. Deacon spoke of how Christ became man to show us His mercy for our suffering and of the blessed Mother’s suffering for the same. She asked us to wait a moment before praying, for her husband to be finished with getting tickets. He came over with a perplexed look, but then his wife said, “We want to pray for Eric.” The husband expelled a deep breath and then seemed completely open for praying. After praying for Eric’s health and choices and guidance and good doors to open for him, the mom gave Nancy a big hug and thanked both of us greatly. She accepted a Miraculous Medal as well as a postcard for the upcoming Alpha at Nancy’s parish, in case any of them might want to come by and see if they like it.

Praised be Jesus Christ! Please keep Will’s eyes and Eric’s situation in your prayers, as well as Eric’s parents, and all the people that Nancy and Dcn. Mark spoke with that day.