“The Presence of A Priest” 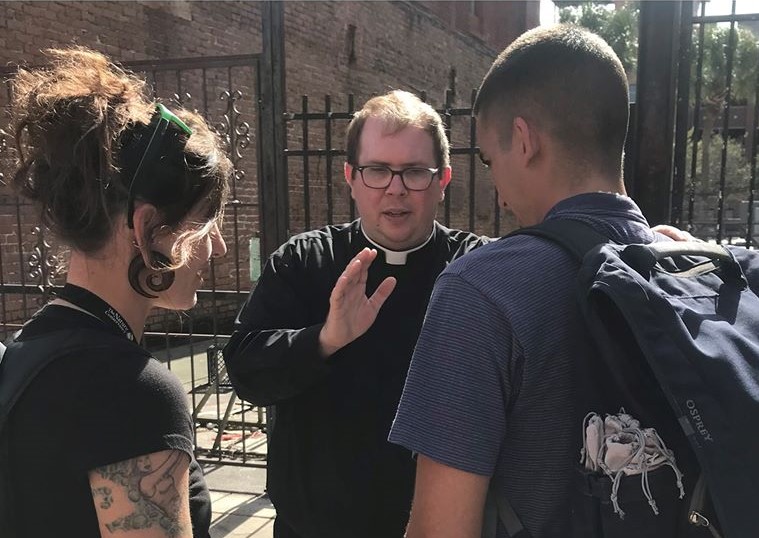 Ybor City, FL. What a blessing it is when we have a priest join us on an evangelization outing. A quote from St. Jean Vianney helps us realize just how important our priests are to us: “The priest is not a priest for himself – he is for you. After God, the priest is everything.” Consider inviting your priest to a future outing. Just their mere presence can be a big boost!

Click here to read more stories from our team in Tampa, FL

The following report comes to us from evangelist Bill and our team in Tampa, FL:

God’s abundant blessings were with us as we hit the streets of Ybor City. The weather was perfect, and we had a great turnout: Reuben, Richard, Mike, Suzann, Gretchen, Bob, Fr. Tim, Shawn & I. What made it even better was we were joined by Father Tim.

Fr. Tim was a natural. He engaged the pedestrians with a big smile and a warm greeting. As I stood off to the side I noticed almost everyone was initially surprised. Not so much that he was there, but that he made himself so approachable by being so friendly. I’d say everyone returned his greeting with a smile and a pleasant response. Then there were those who stayed and talked with Fr. Tim. As an active Catholic we see our priests all the time, and take their goodness for granted. Not so with his audience in Ybor City. The people who asked for his blessing, everyone of them, was as reverent as a child receiving their First Communion. They knew (Protestants, ex-Catholics, New Agers, homeless) that they were in the presence of a good, and maybe even holy man.

We gave away many rosaries, medals, and pamphlets, and had many fruitful conversations. We had a lot of interaction with the homeless, asking for prayers of safety. Sadly, they often prey on each other. We gave away more pamphlets than we normally do. Some to Catholics to help with a family member or friend, and some to potential converts.