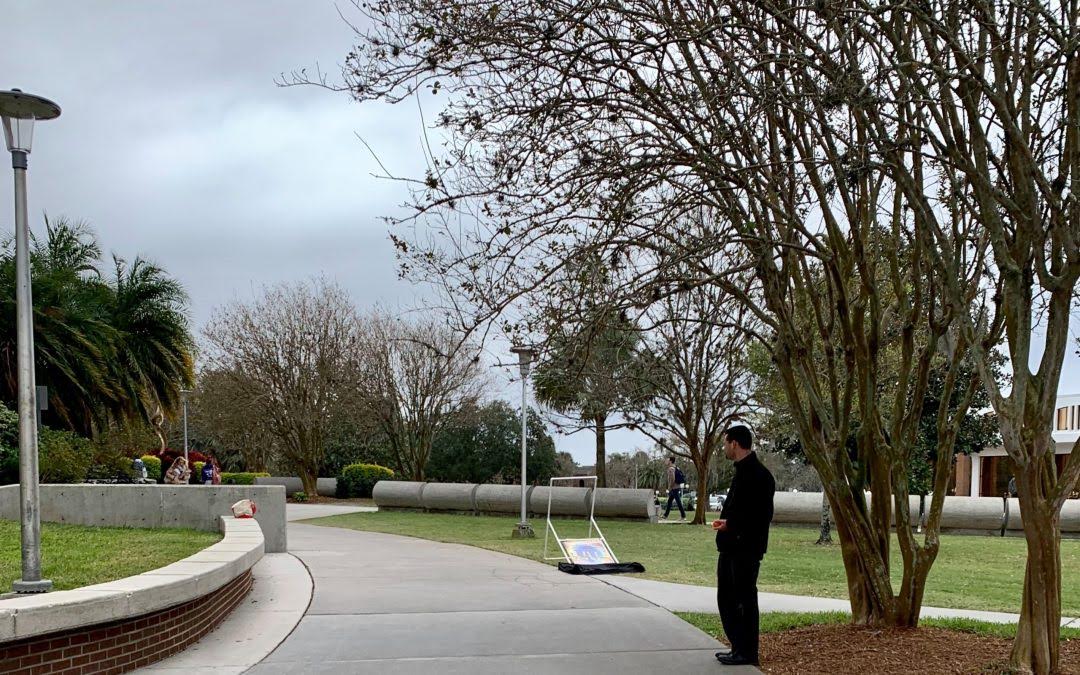 Orlando, FL. When we’re out evangelizing, it’s not uncommon to find members of other faiths out sharing the gospel too. Sometimes they need to be informed of the Catholic Church’s true teaching, instead of the falsehoods that they’ve heard. Such is the case in today’s story, where our evangelist shared the truth of our faith and hopefully gave the Protestant man something to think about.

I’ve been going to the college campus next to where I live to evangelize students and invite them to the local Catholic campus ministry. I’ve met lots of students each week and enjoy talking to women looking for a community to be a part of. Since it’s a public university there are many other Christian groups that also come on campus with pamphlets and signs to try to reach students. I wanted to share my encounter with one of those Christian evangelists.
This man was standing by the library with a sign that had scripture passages and Jewish symbolism all over it. He was an older man and was alone passing out slips of paper with his contact info to bring students to study the Bible with him. While not many students interacted with him, I prayed for the Holy Spirit to show me when the time was right to talk with him. The second week I went to campus was freezing cold, and I saw that he seemed a bit more alone than usual which prompted me to go over and talk with him. I offered him some food that we were handing out and asked him where he was from. He told me all about growing up in South Carolina and being raised in a Christian household. He told me his story about living a sinful life until age 37 when the Lord broke into his life and offered mercy. He was part of a group of Christians with no church affiliation, but they studied scripture and he told me it was sad that many Christians dismiss the Old Testament. I told him that Catholics hold all of scripture to be sacred and understand that both work in unity to reveal Jesus, to which he replied that he didn’t see many Catholics who acted in that way. I pulled up the catechism on my phone, telling him that while some people do not place honor to sacred scripture, the Church declares in the catechism that there is unity between the Old and New Testaments! As the old saying goes, “the New Testament lies hidden in the Old and the Old Testament is unveiled in the New.”
He was a bit surprised and agreed with what I shared, so he began asking me more questions. We talked about the sabbath day and vigil Mass, as well as the covenants of the Old Testament. The Holy Spirit brought to mind many scriptures passages over and over throughout the conversation and he was impressed that I could remember scripture (little did he know I too prayed with the scriptures.) I talked with this man for maybe an hour and decided that I would offer to pray for him. He accepted and we prayed for Christian unity, for the Lord to protect us as we proclaim his message of mercy, and for the Holy Spirit to open our minds and hearts to understand his Word.