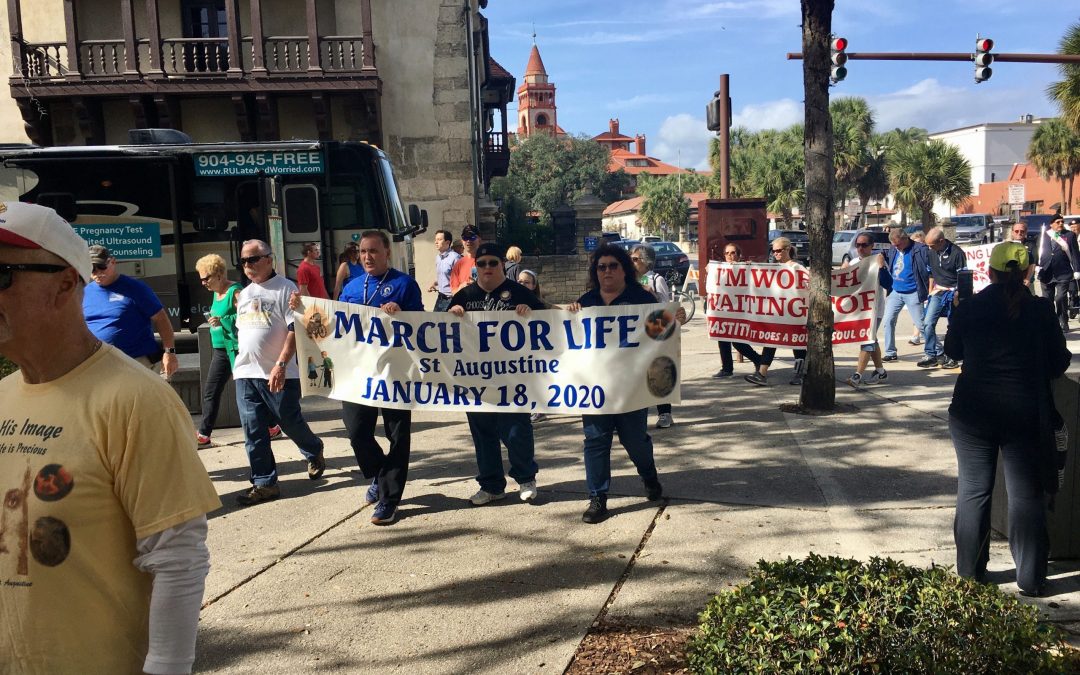 We attended the March for Life in St. Augustine, FL recently and had a chance to meet many Catholics from across the state. There were a lot of people who attended the march, in addition to the usual amount of people touring the city who witnessed the march as it passed. We stationed ourselves at the very end of the march where the local park was to get a chance to talk with people. We met a woman named Sarah who was passing out flyers she made on euthanasia. We offered her a rosary and asked about her flyer. She explained that her father had passed away only a few years ago and that he unjustly was given euthanasia without consulting family in a hospice setting. As a Catholic she felt supported by the Church’s teaching on this issue and wanted to raise awareness through sharing her story. We offered to pray for her which she gladly accepted and asked the Holy Spirit to heal any wounds that were holding her back from receiving peace and joy, as well as prayers for her family. She was very grateful and took a few pamphlets with her.

I walked the local streets with another evangelist and noticed there were a few homeless men sitting nearby. I walked up to the first man named Chris and offered to pray with him. He didn’t want any prayers but did thank us for stopping by. We walked over to another man named Cyrus just as he was about to start smoking. He was trying to get enough money for a motel room that day. He’d moved from South Carolina to Florida for the weather. He also mentioned that he was raised as a Christian and I offered him a rosary. He didn’t want the rosary (I later saw he was already wearing one), but he took the rosary pamphlet. I explained to him how the rosary could be used to grow closer to Jesus and gave him a booklet on the Gospel of Luke. We offered to pray with him and he said yes, so we lead him in a prayer of thanksgiving and asked the Lord to grant him a chance to get a motel room within the coming days. He was very grateful and we went back to our station.