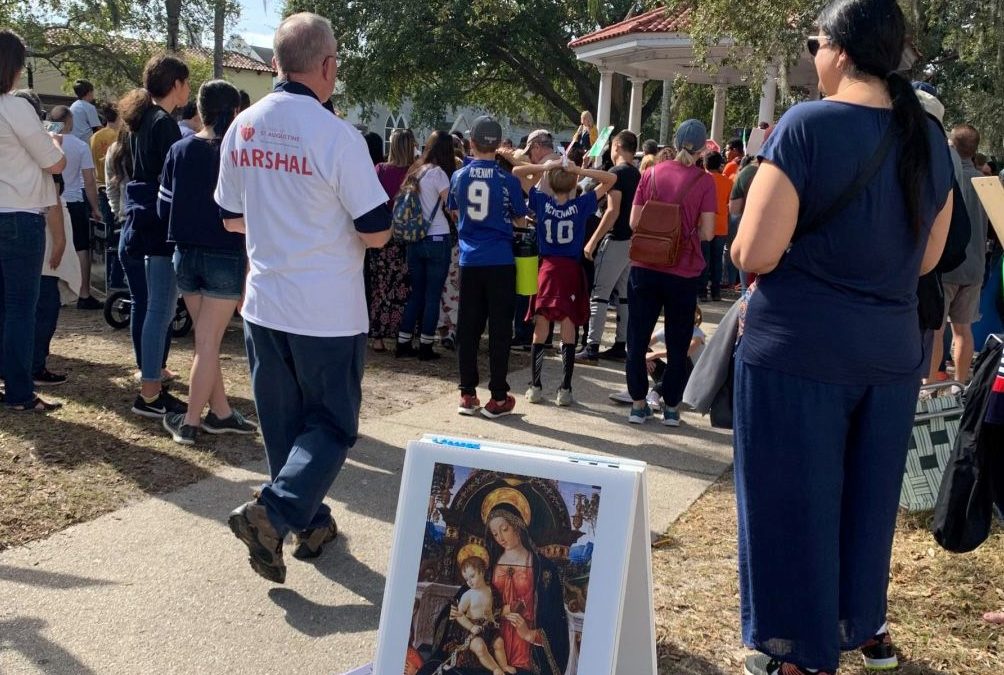 St. Augustine, FL. Here is Part Two of Christina’s story from the March for Life, where she had many good conversations with a variety of people.

The following report comes to us from regional missionary Christine in Orlando, FL:

We were out trying to share the gospel at the March For Life, but we weren’t the only ones trying to evangelize that day. A young gentleman had given our team a small piece of paper with the image of Jesus crucified on the front and the gospel message in the back. He apparently did not say anything, but when I came back to our station I decided I would go meet him and his fellow evangelists and offer them our own gospel cards. They were a group of local Baptists standing only a few feet away at the corner of the street with Bibles in hand. I introduced myself and thanked them for the paper, then I offered one of our gospel cards to them and explained that I was also trying to meet people and talk about Jesus. I got to know one particular man who told me they frequently bring out their youth group multiple times a month to form them in evangelization. He expressed that he wanted people to know that they could “be sure of salvation and that they were going to heaven.” I explained to him that as Catholics we know the way to salvation because Jesus taught us the way, but we are careful not to presume and judge our own souls since we do not have that authority, only God does. I also told him that the March for Life was happening in the city which is why he would meet many Catholics who could also talk about their faith. He was very kind and simply encouraged me to continue spreading the gospel.

The crowd was huge and Bishop Esteves lead the march into the park with the Knights of Columbus. Once the crowd had settled down we started handing out gospel cards to everyone and offering prayer. There were many people who happily accepted a gospel card and upon learning that we were evangelists actually gave us words of encouragement to keep it up. There was a woman named Cindy who had a beautiful shirt with the image of Mary at the Annunciation standing nearby. I began talking with her and she told me it was her first March for Life that she had attended. She told me how she remembered the first time Catholics in the local setting began protesting against abortion when she was young and that through her faith she felt called to come to the march for the first time. She was going to Mass on Sundays and trying to build her prayer life, so I began talking with her about my own relationship with Jesus through daily habits that I developed over time like going to adoration and Lectio Divina. I ended up giving her a few more resources from our wagon and exchanging my contact card with her.