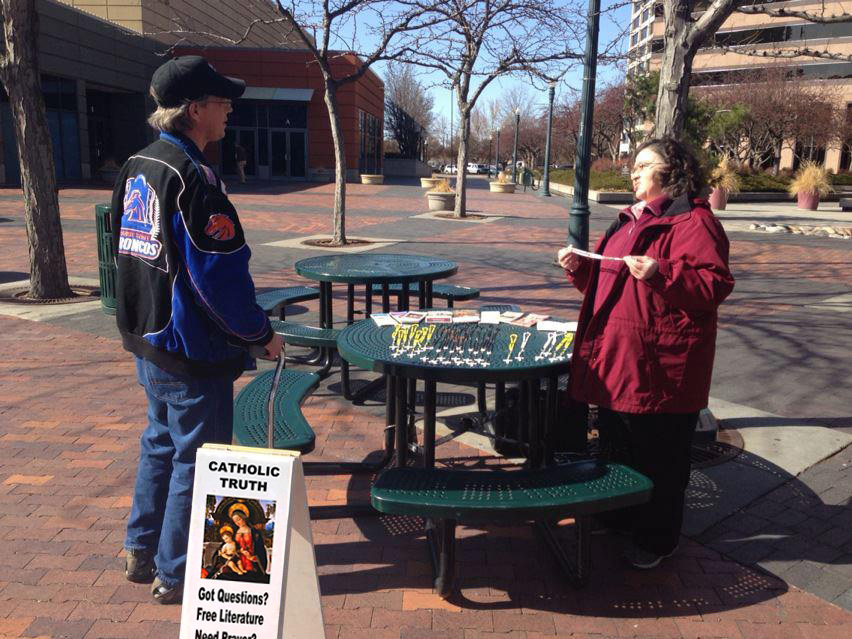 Boise, ID. The process of growth is usually slow with most things, be they plants, animals, or humans. The same goes for spiritual growth. But like a doorway covered with pencil marks to show the growth of children over time, if we were able to determine spiritual growth with some kind of measuring stick, we’d hopefully see incremental growth. That’s what our teams can hope for in the work of evangelization. The seeds that they plant out on the streets will slowly take root and begin to grow into virtue and love of God.

The following report comes to us from evangelist Lucy from our team in Boise, ID:

We had two evangelists turn out to share the gospel today. Foot traffic was very light at first so we prayed the Luminous Mysteries during the lulls between visitors. We did have a few good encounters though. A Catholic priest stopped by who was in town for a youth retreat. He had just finished his daily Rosary walk and was happy to see us. At our request, he prayed briefly for those who encounter us, and for us, then hurried away to an appointment.

Later on, we met a couple who were walking by, accompanied by a boy who was perhaps 8-10 years old. The parents declined to receive a Rosary, but the boy wanted one. They let him approach the table, and stood watching. The boy knew who Christ was, but nothing about the Rosary. So, evangelist Chuck gave him a quick explanation and a Rosary pamphlet. He encouraged the boy to use the Rosary to get closer to Jesus, and also to pray it with his parents.

A man from a Catholic parish in the eastern part of the state was in town for an educator’s conference. About 40 years ago, after marrying a Catholic woman, he converted to Catholicism from a non-Catholic Christian denomination. He had gone through an entire year of Marriage Preparation classes. Then, a year or two later, when he decided to become Catholic, he had to go through another full year of RCIA. (And he’s still Catholic today!) We gave him a map of area parishes, so he could catch Sunday Mass. He said he admires a priest who serves at the cathedral.