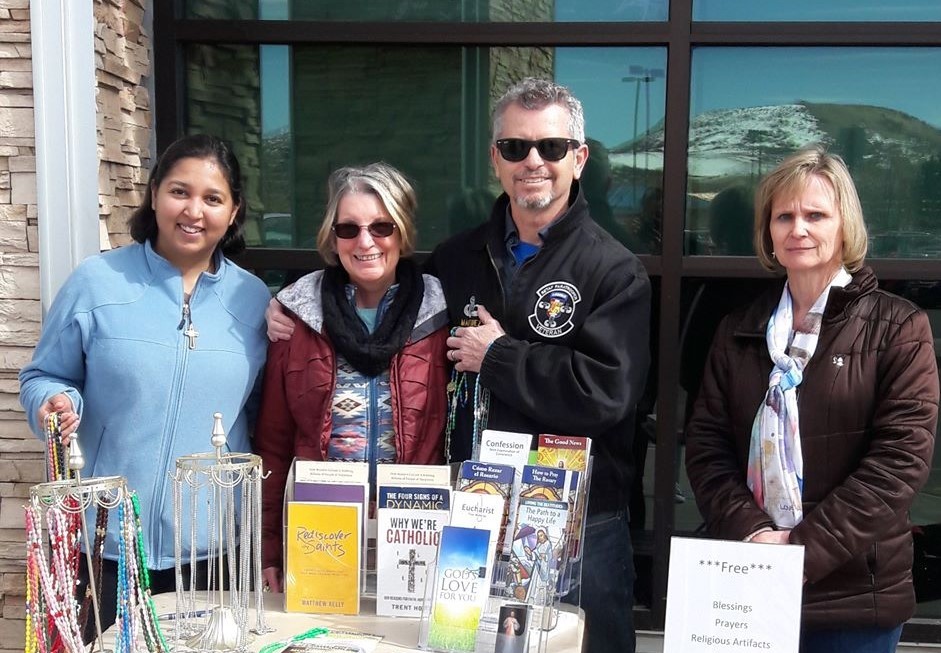 Castle Rock, CO. World famous physicist Albert Einstein once said, “The only thing that you absolutely have to know, is the location of the library.” There you can find so many wonderful books full of stories, historical facts, instructions, and so much more. All thanks to the written word, a simple yet marvelous method of communication. In today’s story, our team was blessed to speak to some library patrons about another, more important kind of word…the Word Made Flesh.

The following report comes to us from team leader Matt with Castle Rock/Parker-St. Francis team in Castle Rock, CO:

On Saturday, a few of us hit the streets to do some evangelization. What a surprise it was! We set up in front of the Castle Rock library, where our experience in the past had been generally light foot traffic. But yesterday we met with quite a few folks. We gave out many rosaries, some medals, a CD or two and a couple of books. But perhaps most importantly we offered to pray for people on the spot, and several were open to it. Here are a few of our encounters:

We met a nice woman who lives in Castle Rock and had not been to church in a long time. She accepted a rosary, and when asked when she had last been to confession, she said it had been a very long time, So she accepted our pamphlet on Confession. We suggested she could make an appointment with Fr. Brad or Fr. Mark at St. Francis.

A young man when asked if he would like a rosary responded with “no thanks, I’m a Christian”. So, instead we asked if he had any prayer needs or requests. He said yes, for him to fight his addiction. He thanked us for the prayers. I wish we could have done more for him.

We had a conversation with a young man who was raised in a strong Protestant family, but had recently become to question his beliefs from that faith tradition and was now interested in the Catholic Church. He had actually just checked out a book by Bishop Barron from the library! Thankfully we were to talk to him about Catholicism and answer his questions.