“Taking Nothing For Granted” 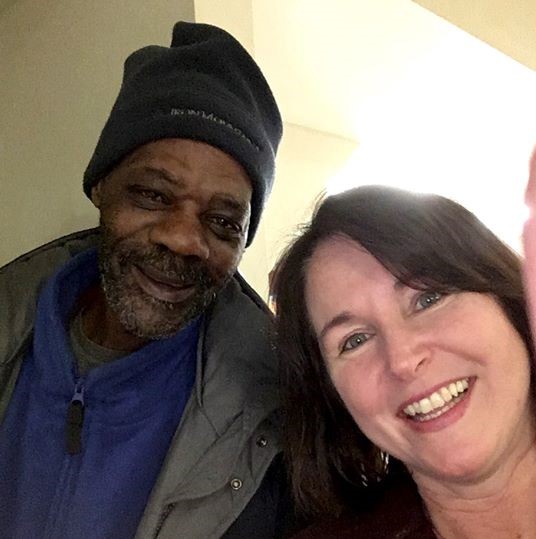 Philadelphia, PA. St. Camillus de Lellis once said, “The poor and the sick are the heart of God. In serving them, we serve Jesus Christ.” What a powerful motivator to seek out and help these impoverished souls. Of course, some SPSE teams have more interaction with the underprivileged than others. One team that constantly speaks with the indigent is our Lower Bucks team in Philadelphia. They’ve come to appreciate why Our Lord has a special love for the poor because of their complete reliance on Him. Today’s story and prayer requests show exactly that.

The following report comes to us from evangelist Nancy and the Lower Bucks team in Philadelphia, PA:
After attending Mass at Saint Christopher’s parish and going to confession, we headed downtown and parked at the Cathedral. After a ten minute walk in the brisk winter air we arrived in Suburban Station, where we set up our stand a few feet away from Dunkin’ Donuts. It did not take long for our first visitor to stop by. As it turned out, it was a man named Jay who immediately recognized us from a prior encounter last year in front of the Cathedral. He was born and raised Catholic, and had accepted a Miraculous Medal from us last time. Jay was overjoyed to see us today, as he had subsequently lost the medal and was anxious to replace it. We were likewise thrilled to see Jay a second time and spent some time praying and talking with him before he went on his way.
We had many other wonderful meetings over the next two hours, and were reminded time and again why Jesus focused his attention on the poor and infirm members of our society: they are humble enough to know that their lives depend on God’s providence, and they do not take anything for granted. Please take a few minutes to pray for the following individuals:
• Dante – young man needing healing from probable drug withdrawal problems
• Dora – for housing for her, her husband Larry and their four year old daughter Miracle
• Duke – for his finances (he shined Deacon Mark’s shoes for a donation)
• Vladimir – for God’s blessings and healing from nighttime worries
• Lamar – for the safe delivery of his son Sameer due next month, and for Sameer’s mother Angela and her daughter
• Patrick – for God’s blessing on him and his family
• Victoria – to be reunited with her family
• Marguerite – to find a new church community in Lancaster
• Jeanne – for reunion with her friend Connor, who was supposed to meet her in Suburban Station a day ago
• Justin – for help in getting through the rough patches of life
• James – asking for God’s blessing for his son, daughter and their mothers,and himself
• Marie – a Filipino woman asking for God’s blessing on all areas of her troubled life
• Burton – Restoration of his business after a bad relationship with a woman led to the business’ failure
• Rudy – for healing of his painful hip and knee
• Jay – for health and prosperity
• Mark – Protestant Christian who stopped by to pray for our ministry with us!
• Taisha – for healing from alcoholism
• Harrison – for God’s blessings on his days
• Michael – healing after being shot in the head (now in a wheelchair) and for a home
• Timothy – for physical well being
Praised be Jesus Christ!