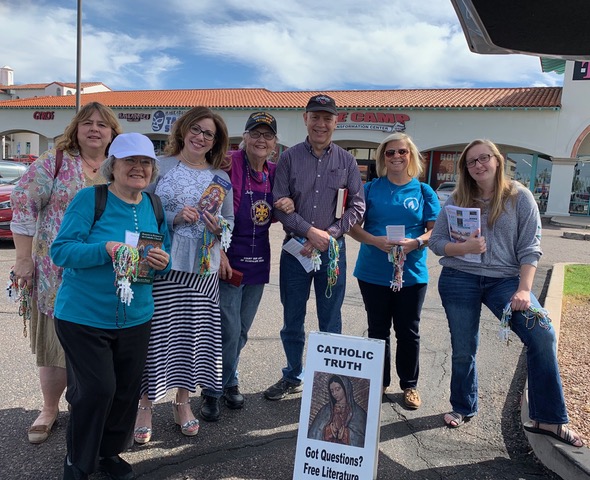 Phoenix, AZ. Today’s story shows how those who step out willing to serve the Lord will be provided with ample opportunity to share His Truth and Love. Even newly trained evangelists who don’t know much about how to share the gospel found success by simply listening to instruction on the basics and then acting on those instructions.

Click here to read more stories from our team in Tempe, AZ

The following report comes to us from evangelist Sean normally from Tempe, but lending a hand in Phoenix, AZ
Fr. Eduardo Montemayor, SOLT at Most Holy Trinity in Phoenix, Arizona recently held a retreat called Disciple Formed in Holiness. One weekend was for Spanish speakers and another weekend was for English speakers. One part of the retreat involved trying a ministry out of the comfort zone of the participants. I offered Street Evangelization as one option.
Each weekend a number of participants chose street evangelization. After reviewing the basics of the St. Paul Street Evangelization method, participants hit the streets of North Phoenix for 2.5 hours to share the Good News of Jesus Christ and the Church he founded. All had wonderful encounters. Discussions, prayers, Kerygma proclamations and invitations to faith began as soon as the evangelists arrived at the local light rail station. I was kept busy guiding the new evangelists and keeping everyone supplied with rosaries and tracts.
There was one very interesting encounter I had with a follower of the controversial Faithful Word Baptist Church based in Tempe. Although their teachings are very anti-Catholic, I encountered a woman who felt drawn to Catholicism even though she had been taught only bad things about the Church. After answering a few questions, I prayed for this woman and gave her his contact information in case she has additional questions. All participants said that they would do this again and two expressed interest in starting a team!!
Praised be Jesus Christ!