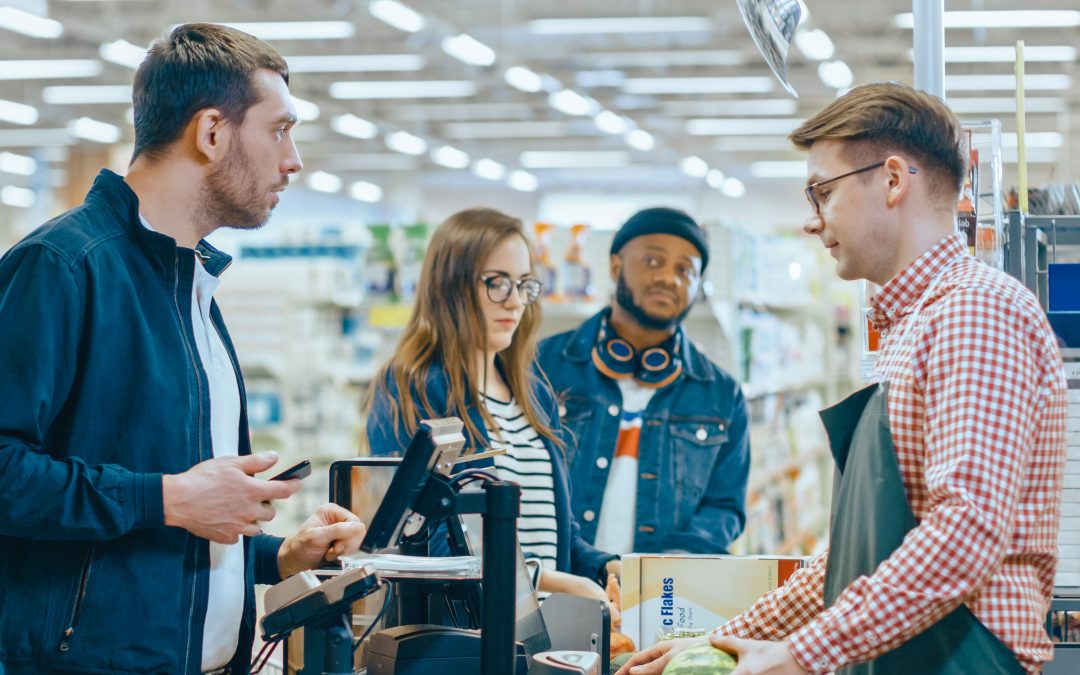 Rochester Hills, MI. In the past, the phrase “the front line” referred to those soldiers who were the first line of defense in a war. Merriam-Webster defines it as “the most advanced, responsible, or visible position in a field or activity.” In the strange, new war against COVID-19 we’re fighting these days, the “front line” has become health care workers, grocery store employees, bank tellers, and others who work in customer service. Today’s story features an evangelist who wanted to give some comfort and spiritual protection to our new front line of grocery store employees who put themselves at risk every day.

The following report comes to us from evangelist Michael and our SPSE National team in Warren, MI:
As I was stepping out to run a few “low-contact” errands, my father asked if I could pick up some honey. I told him yes, and so I embarked on my trip with the necessary precautions (N95 face mask and rubber gloves.) After finishing filling my tank with gas and visiting the corner convenience store, I stopped at our local grocery store.
After finding the honey, thanks to the help of a female employee, I continued to shop for a few other items. As I passed a cashier, he waved to me indicating he was open and ready to ring me up, to which I responded, “I’m actually still shopping.” However, I thought perhaps now would be a good time to give him a Miraculous Medal. So I walked over and told him I’d like to give him something. I handed him a medal already on a chain along with a Miraculous Medal card and explained what it was, and how it had protected many during a cholera epidemic almost two centuries ago. He asked, pointing to the medal, “Is that Mary?” I told him, “Yes, you noticed that.” He confided that he was Catholic, and I said “that’s great.” My intention was to give him some comfort, but realizing that I still had shopping to do, I said, “God bless you” and tried to finish.
As I walked up and down the aisles, I spotted the worker who had helped me locate the honey earlier. I approached her and expressed gratitude for her help, and then asked if she would like a Miraculous Medal. She responded instantly, “No, I don’t need that.” Sensing she wasn’t open to a conversation, I accepted her answer and continued my shopping.
Something told me I should go back and continue my conversation with the young male cashier, so once I finished shopping, I pushed my cart into his line and began unloading onto the conveyor belt. Trying to start conversation, I asked, “Has it been busy lately?” He seemed a little less warm this time around, responding with a simple, “No.” It seemed he thought I was going to pursue more about his Catholic faith (which I was!), and seemed to close off the opportunity. So I thanked him for his help and went on my way. At this point, I thought it best to pray for him and leave him in the hands of Our Lady of the Miraculous Medal.
Praised be Jesus Christ!