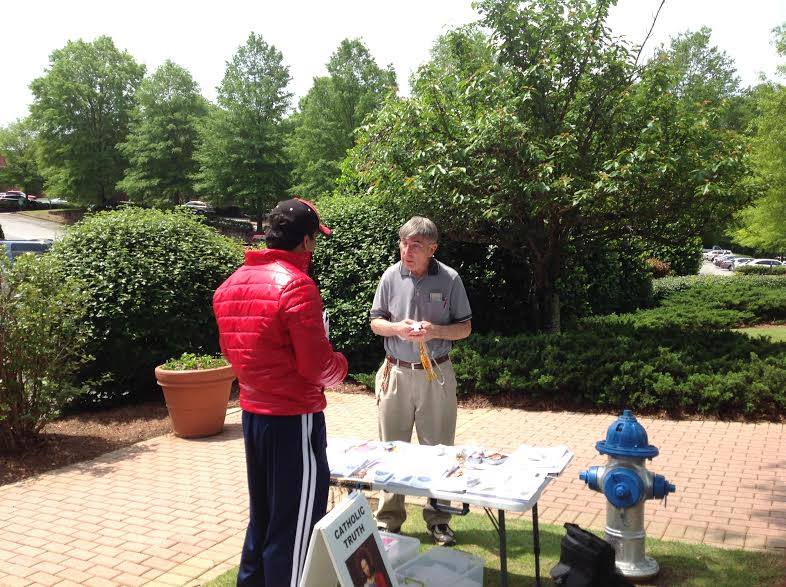 Atlanta, GA. Today’s story features a spiritually lost young man seeking a higher education at college, and two evangelists attempting to give him the highest education possible, to know, love and serve God.
PLEASE NOTE: This story took place before the COVID-19 virus started spreading, which is why our evangelist is out freely speaking with people. Also, it should be noted that while the photo shown is one of the evangelists in the story, it is from a previous outing.

Click here to read more stories from our team in Atlanta, GA

The following report comes to us from team leader Clarence with our team in Atlanta, GA:
Cathy and I are out evangelizing again at a college campus in Atlanta. Hank, an atheist, has been greatly infected by the culture of death. He is a lost soul like many on college campuses today. But he’s reaching out for something this day to us. There must be a searching deep within his soul.
It seems Hank is talking to Cathy about how someone chooses to go to hell, when I break into the conversation and say, “I don’t want to go there.” Hank agrees, saying “I know, right? It doesn’t sound too great.” So then we talked about how to get to heaven. We shared about Jesus’ death on the cross for mankind’s salvation, of the need for a deep, loving relationship with Christ. “Take up your cross and follow Him. Cathy said “He is the narrow gate.” Clarence added, “We want to follow our own will, but that is not the way…Jesus showed us on the cross what love is.” The whole time the two evangelists are silently praying for Hank, and unfortunately sense his resistance. “I don’t believe that God exists.” Clarence responded, “There’s a lot of evidence God exists. I have an idea. Ask Mary, the mother of Jesus if she will show you that God exists. Ask her to show you, then see what happens.” We then offered Hank a Miraculous Medal, explaining its divine origins and the many miracles associated with it. The young man answers, but doesn’t seem to grasp things yet. Then he poses Pontius Pilate’s question, “What is truth?”
Hank notes that many religions claim to have the truth, but says it could be with any of them. They argue about if Jesus actually existed, if people actually have souls, then about sex and the culture’s view vs. the Christian view, but unfortunately Hank has class now and says goodbye and fades into a crowd of young people.
Praised be Jesus Christ! Both evangelists agree that Hank came to them for some reason that day, and they prayed that God will someday be able to break through to this lost soul, like in Luke 15, “Rejoice with me; I have found my lost sheep. I tell you that in the same way there will be more rejoicing in heaven over one sinner who repents than over ninety-nine righteous persons who do not need to repent.”