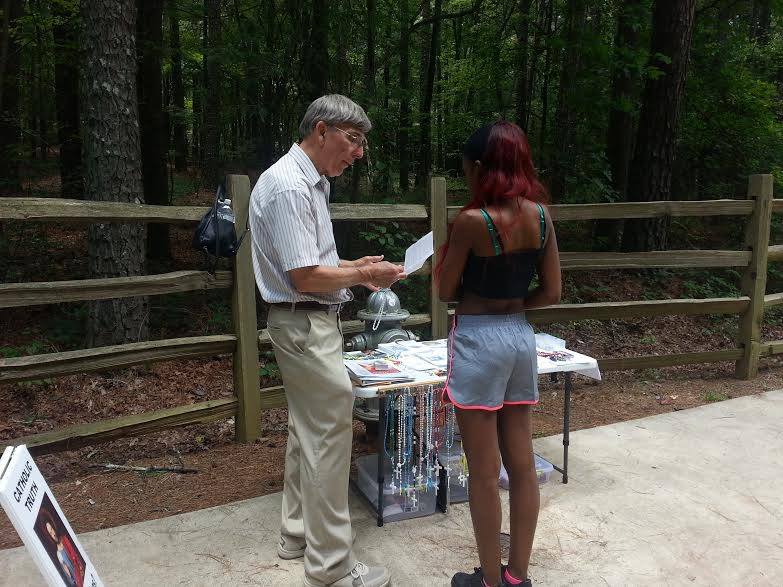 Atlanta, GA. Today’s story features two of the members of our Greater Atlanta SPSE team evangelizing a young Muslim woman who was open to what they had to say. Let us pray that all Muslims may be open to the truth of Jesus Christ and conversion to the one true faith.

Click here to read more stories from our team in Atlanta, GA

The following report comes to use from team leader Clarence with our team in Atlanta, GA:

This was a good morning, because we met a young woman named Lana. Lana was a peaceful, meek, student who stopped by our table. She said, “I think you guys are doing a very good thing here. May I have the Miraculous Medal?” We told her “Absolutely!”, gave her a medal, and shared the background story. After hearing the history of the medal, she replied, “That’s really cool!” We then offered her a free rosary, which she accepted. However, when we extended an offer to teach her how to pray it, she had to decline as she didn’t have the time. Then she told us she was Muslim. We showed her pamphlets on doctrines on Mary, and explained that we accept her as she is but hope that she would come to believe as we do, and that we share our faith in love.

I told her that there are 41,000 Protestant denominations, whereas Christ promised he would protect the faith through College of the Bishops, Peter and the apostles, in succession the pope and the bishops. Not through individuals in the systems, but within it He protects our faith. We have believed the same thing since the time of the apostles up till today. Lana replied, “Wow!” It is not because of people like Peggy and I, because we would disagree if it was just us. That’s why Protestants disagree so much because there is no way to not have disagreements unless Christ protects the faith. So within our Catholic Church our beliefs are protected. Lana then told us she needed to get to class. Clarence said, “God bless you and stop by again, Lana, to talk with us.”

Praised be Jesus Christ! Did you notice how the Miraculous Medal was used to share Christ with a Muslim? Muslims do not believe that Jesus is God or that Jesus died for us on a cross for our reconciliation (although they do believe he was a prophet), nor do they believe in praying to the Saints. But they do have a deep reverence for Mary!