“Back to the Streets (Park actually)!!” 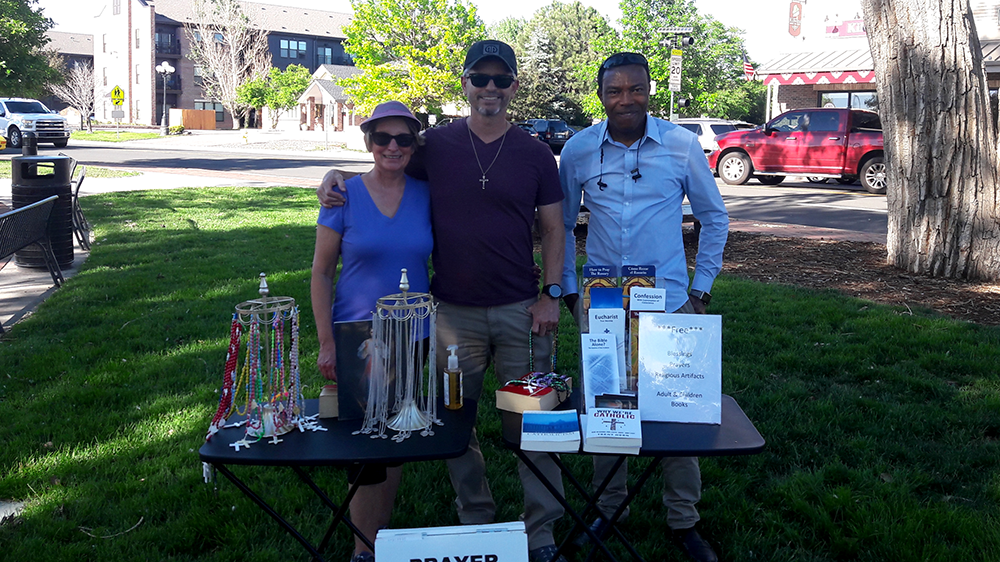 Castle Rock, CO. It’s important to move when the spirit asks, so sometimes you have to do something without planning much. Perhaps that’s what happened in today’s story, when one of our teams from Colorado had an impromptu outing, with good results!

The following report comes to us from evangelist Matt, who is also the leader of our team in Castle Rock, CO:

A few of us went out (unplanned) on Thursday evening and set up in the park to evangelize. It was our first time out since the COVID-19 crisis began. And wow, it was fantastic! I think people are fearful and looking for hope, and I pray that we offered some. I believe that we did! Here are a few stories:

As soon as we set up three young women approached us. They wanted rosaries. We asked if they had any prayer requests. One of them (Corinne) said for her health issues so we prayed with her and for her. We next met a man, who I believe was homeless. His name was Mike. When we learned this, we asked if he wanted a St. Michael medal. We asked if we could pray with him as well. He said yes, so we did.

Later on we met a woman born and raised Catholic, who taught religious education at one time, but who fell away because the kids were disruptive at Mass. Well…in any case we talked to her for quite awhile, mostly small talk, but we did ask her to return to Mass. She said she would try. I suggested she return to the confessional so I gave her our pamphlet on Confession. Finally, we chatted with two nice recent graduates (a boy and a girl) from a Lutheran High School. They were very nice and interested in our pamphlets. He asked, “what is the Eucharist?” We gave him a pamphlet on it and briefly explained that as Catholics it is the “source and summit of our faith” and explained a little bit about John 6.

All this in just one hour! Praised be Jesus Christ!