“Anxious to Pray the Rosary” 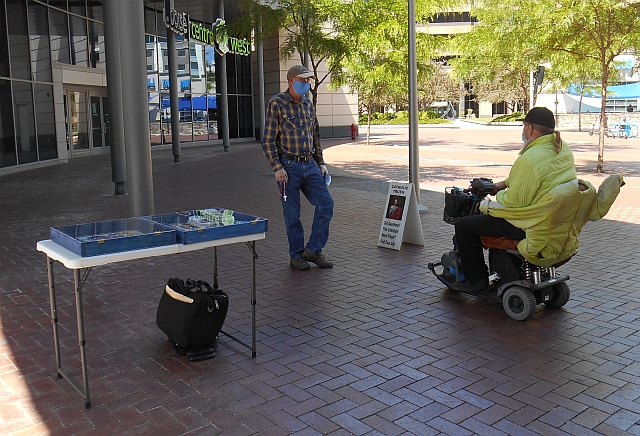 Boise, ID. It’s refreshing to see two people in today’s story who were unfamiliar with the Rosary, yet once they learned what it was they wanted to pray it “right away.” This shows that once people of Good Will learn the truth of what the Rosary actually is, they can’t wait to take part in the beautiful meditations on Our Lord’s life, death and resurrection. May He open the minds and hearts of all the people we encounter on the street to the beauty and truth of the Most Holy Rosary.

The following report comes to us from Lucy, the leader of our team in Boise, ID:

Cold, breezy weather kept most people indoors, but there were moments of sunshine. Despite the light foot traffic, we did have some good encounters. Here are a few of them:

One man from a group on mobility scooters stopped. He had gone through RCIA just a few years before and had recently moved here from out of state and connected with a local parish. He took a rosary and its pamphlet. Next, two men stopped, both non-Catholic Christians. One asked us to explain the difference between Catholicism and Christianity. Chuck mentioned the historicity of the Church, its unity, and apostolic succession. He recounted an experience during his RCIA journey, when he shook the bishop’s hand. Once Chuck understood the significance of apostolic succession, he was awestruck. His listener seemed equally impressed with the connection of our bishop all the way back to Christ. He and his friend each accepted a rosary and expressed the desire to try it “right away.”

A heavily tattooed man and woman stopped. She also sported lots of piercings and was wearing a t-shirt full of non-Christian symbols. They did not know what the Rosary was, and were thrilled to hear it consisted of meditations on scenes from the life of Christ. They each accepted a Rosary and its pamphlet, and the encouragement to try it, which the woman couldn’t wait to do.

Finally, two 20-something men stopped. One stood back, while the other approached the table. He was not familiar with the Rosary, but did know and love Jesus Christ. He grew interested in the Rosary when he saw its emphasis was on the life of Christ. He had not heard of a Creed before and was glad to know it was in the pamphlet. The man who had been standing back then also chose a Rosary, asking if it included the prayer used in his addiction recovery group. It turned out that he meant the Lord’s Prayer and was glad to have a copy of it in the Rosary brochure.