“Come Back to the Church” 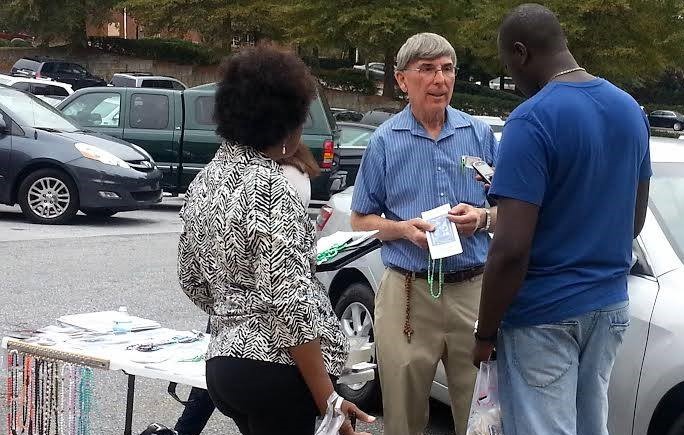 Atlanta, GA. Sometimes all it takes to get someone on the path back to the Catholic faith is a simple rosary given in love. Let’s pray that the couple in today’s story are ultimately convinced after their encounter with our evangelists (and some free rosaries and a lesson on how to pray it.)

A young couple stopped by and each accepted a rosary. I found out that both of them were raised Catholic but had fallen away. Then I offered to teach them the rosary and they both agreed. She introduced herself as Bernie, so I shared the story of St. Bernadette and how Mary appeared to her. Then I told her about Saint Catherine Labouré and the Miraculous Medal. The man introduced himself as George. I told them about my church in Smyrna, which is where they were about to move. I mentioned that the priest is extremely vibrant and has grown our church like crazy, and that it’s diverse and multicultural with Nigerians, Filipinos, and many others.

Then I explained why I am Catholic and went through my list of reasons. First, Jesus established the Catholic Church, where other denominations had mere men as founders. I also pointed out that John 17 tells us that Jesus wanted us to all be one, yet there are thousands of Protestant denominations. Then I mentioned that non-Catholic Christian faith is more subjective (me, the Bible and the Holy Spirit) vs. the objective nature of Catholicism (the Pope and college of bishops, the Church and her authority, Scripture, same Mass all over the world, the Eucharist and sacraments, Mary, etc.). I told them it doesn’t mean other Christians don’t have truth, but we have the fullness of Truth and we would say that non-Catholic Christian have less than the fullness.

They had to leave so I encouraged them to come to Mass and gave them my card. It was a pleasure speaking with this couple. Hopefully they have been touched by our love and have come to understand the importance of being in the family of God in Christ’s true Church.