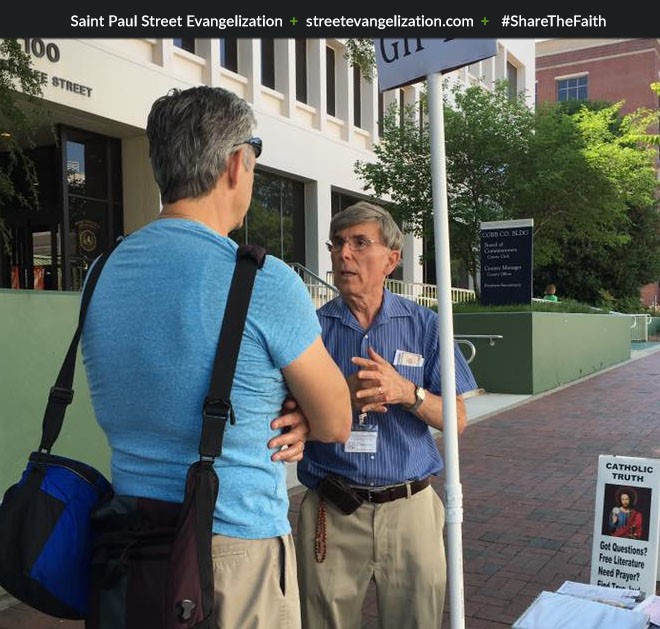 Atlanta, GA. A common prejudice in Christianity is that of anti-Catholicism. Today’s team encountered a man who used to be anti-Catholic, yet learned he was wrong. Our team tried to further his understanding of the one true church so he might consider it more. Many seeds were planted. We can only hope that they bear fruit.

Today it was Peggy and I (Clarence) out evangelizing. I invited a man to come over and check us out. His name is Jerome. We offered him a free rosary and info on how to pray it. At this point, Jerome interjects, asking if we are Catholics. Peggy confirms we are, while our new acquaintance says he’s Pentecostal. I begin to explain to him that Catholics worship God as he taught us to in the Holy Mass. As I’m explaining this, Jerome tells me that he didn’t accept Catholics as part of Christianity until a year ago. He’d heard Derek Prince, famous Protestant pastor, say something about people who were anti-Catholic are bigots, and it struck a chord. Peggy affirmed him in being open to this truth, and I told him “instead of being a bigot, you’re learning to love and that’ is what Christ is all about.”

We all agreed it was good to accept each other as brothers and sisters in Christ, even though we were different. I mentioned that some Protestants like to attack Catholics, probably because it is the church that Christ established on earth. Surprisingly, Jerome mentioned Matt. 16:18, “…you are Peter, and upon this rock I will build my church.” I affirmed him, and tried to stress to him that the Catholic church is the first Christian church, the one Christ intended. Jerome seemed to accept most of what we were saying, although perhaps not fully grasping it.

At this point, he asks if we can take a picture with him. We agree and gather together like old friends for a selfie. Jerome said “God bless you” and gave me a big hug. While he wouldn’t take a rosary, but he did say he’d send a friend up to visit us.