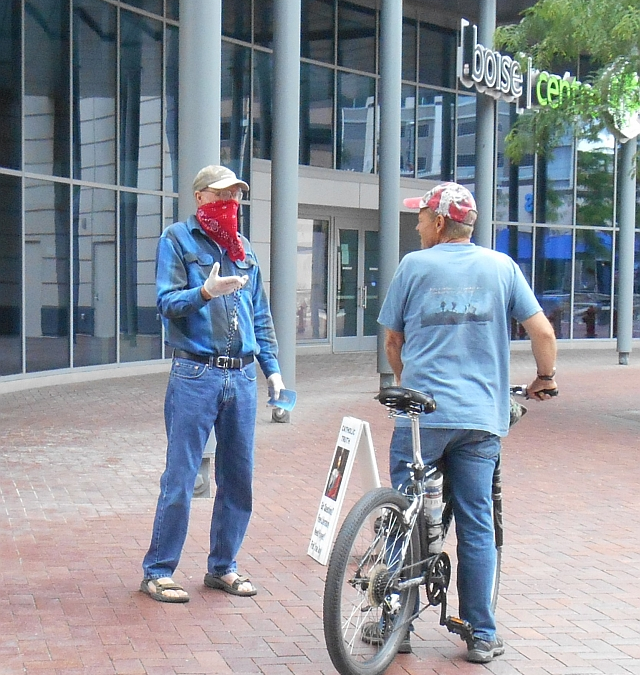 Boise, ID. People don’t remain neutral about the Rosary, as was evidenced in today’s story. We can only pray that everyone may react positively to the Most Holy Rosary when offered by our evangelists.

The following report comes to us from Lucy, the leader of our team in Boise, ID:

A visitor was evasive when asked whether he knew anything about the Rosary, or if he knew Christ. Finally, he admitted he was unsure which, if any religion was true. Chuck encouraged him to be a “good agnostic” and to explore the prayers of the Rosary with an open mind, to dig deep into the Rosary’s stories as he asked his questions. Lucy also gave him a Good News/kerygma pamphlet. He said he would study it and try the Rosary, saying, “Who knows? Maybe this will bring me to faith?” Lord, please grant he listens to the Holy Spirit!

A group of adults on electric scooters passed by, then one man circled back. Staying on his moving scooter, he asked, “Why are you idolaters?” We replied, “We don’t worship the Rosary!” But he insisted, “Then why do you sell the thing?” To which we replied, “We don’t sell it, and it’s for prayer.” He declared, “It looks like idolatry to me,” and sped away. Afterwards, we prayed one decade for him in reparation.

A nonbeliever stopped, but didn’t seem interested in the Rosary. He saw it as just the same as prayer beads used in non-Christian religions. We gave a quick explanation of the Rosary and how to pray it. We also gave him a copy of the kerygma. He seemed a bit reluctant to accept the pamphlet, but politely did so. Then he told us a story of a buddy who served in the military overseas. They were usually forbidden fires or any kind of light in the trenches, but during a cease-fire they were allowed some light. His buddy told him of one night during a ceasefire, when he looked up and down the trench at the fires. He said the only sound he could hear was the clicking of rosary beads. After our visitor told us the story, he suddenly looked with a new appreciation at the Rosary he had just chosen, and expressed an eagerness to learn to pray it.

Praised be Jesus Christ! Please join us in praying for those souls we encountered today, both the positive and negative responses.