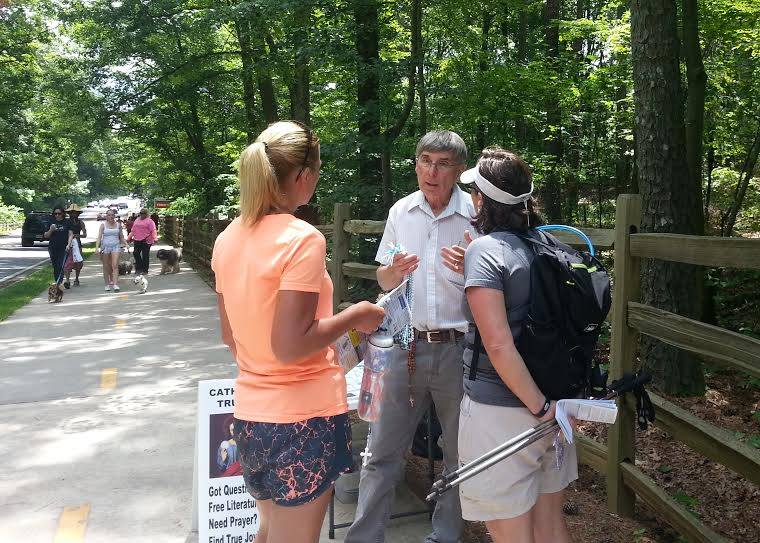 Atlanta, GA. PLEASE NOTE: This story took place before the COVID-19 virus started spreading, which is why our evangelist is out freely speaking with people without a mask. Also, it should be noted that while the photo shown is one of the evangelists in the story, it is from a previous outing.

A young math student named Bridget stopped by and accepted a free rosary and accompanying pamphlet. When I asked if she was Catholic, she said, “No, I am actually kind of confused.” Her family had diverse beliefs, and she didn’t know if there was even a difference in Christian churches. So I tried to explain to her how Protestants and Catholics differ. Protestants are not unified in their faith, and there are approximately 41,000 denominations. But Catholics are united in beliefs, all over the world in fact. The essence of our faith is founded on Jesus and the apostles (I explained the kerygma), because Jesus established our church and gave his life for us. She responded affirmatively to everything I was saying.

Then we talked about a variety of things like Holy Mass, papal infallibility, RCIA, and even touched on Catholicism’s Jewish roots. I invited her to Mass, and even offered to sit with her beforehand and explain to her everything that’s going on. She said “ok.” Bridget then told me that her fiancé’s mom and stepdad were Catholic.

She said she’ll graduate this semester with a Bachelors in mathematics. But the funny thing, she was learning that math is just temporarily important. I told her I think that’s good that you are realizing that, and said in a way everything is temporary, except God. We generally think that our whole life is not temporary, but it is. This life is really short compared to eternity. Like your Math degree is a good thing and it will serve you well, but it’s not what life is about. Bridget agreed, saying it helps you survive the moment, but in reality you could be gone tomorrow. I concurred, and told her that I hoped she believed that Catholicism fits with that thinking. It’s Christ’s first Church he intended. Like you’re saying, making a living, your Math and things are really not what life is about, it’s really about God, a life in Christ. I then offered Bridget my card and the other evangelist Veronica wrote her name and number on it.