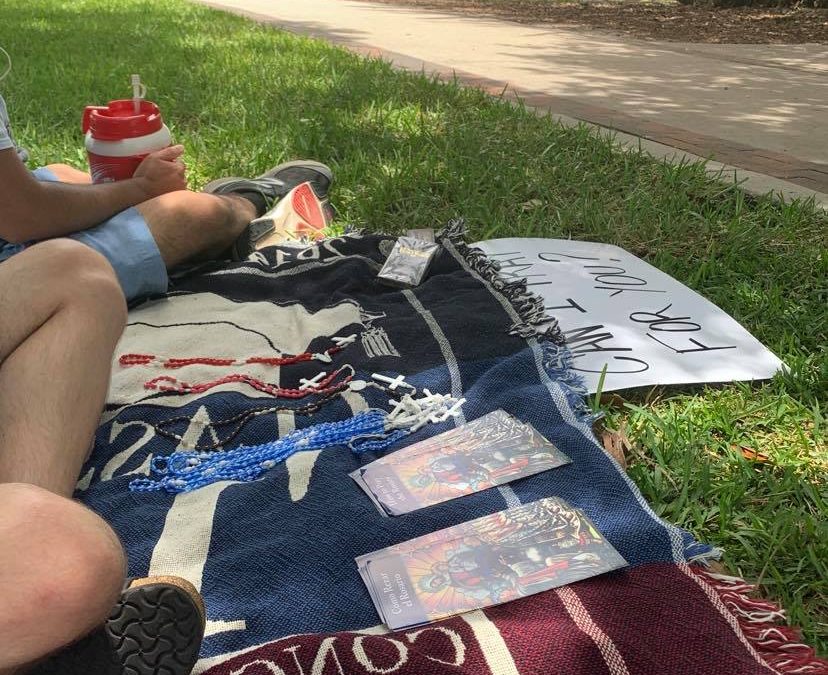 Orlando, FL. Today’s team went out again for the first time in months since the pandemic hit. They wanted to do something simple that would touch people’s hearts, so they went to Lake Eola to set up a prayer station and created signs that read “Can I pray for you?” and had some rosaries on a picnic blanket for those people walking by.

Click here to read more stories from our team in Orlando, FL

The following report comes from urban missionary Christina, leader of SPSE Orlando:
:
We were out evangelizing for about 2 ½ hours, praying with locals. After walking around the park, I switched with my teammates and sat at the prayer station. I began a decade of the Rosary for intercession. A man named Nate came up to me with a sign that was asking for marijuana. He smiled and said he was just being honest, then shared with me that he was having a lot of anxiety and suffering but he couldn’t understand why God felt distant. I asked one or two questions and listened to why he felt anxious. I shared with him times when I felt desolation in my own prayer life, and began talking about why suffering continued to exist even if we are faithful to God. I told him that God allowed suffering, and Paul saw it as an opportunity to be close to Jesus on the cross who suffered for our sake when he could have chosen something else. I shared the kerygma with him and asked if he ever prayed the Rosary. Nate didn’t want one at first but he continued the conversation.
Another man who seemed like his friend came up and asked for a few rosaries. So Nate began talking to my other teammates that had just arrived and I talked with this man about the Rosary. He shared that he used to be a preacher before moving to Florida and that he loved going to Mass at the cathedral from time to time. He was not Catholic, but he did have some questions about the hierarchy of the Church. I shared with him a bit about early church history and Apostolic Succession, and asked if he would like a card on Catholic doctrines which he accepted and left.
We continued talking with Nate and then we packed everything for the day. He asked us if we had any time for coffee to which we all agreed and we went to a local Wawa station for some drinks and snacks. We got to know him a bit more and had some great conversation on keeping a prayer life and possibly starting a Bible study with him. Please keep him in your prayers!
Praised be Jesus Christ!