“Blown Away by St. Benedict” 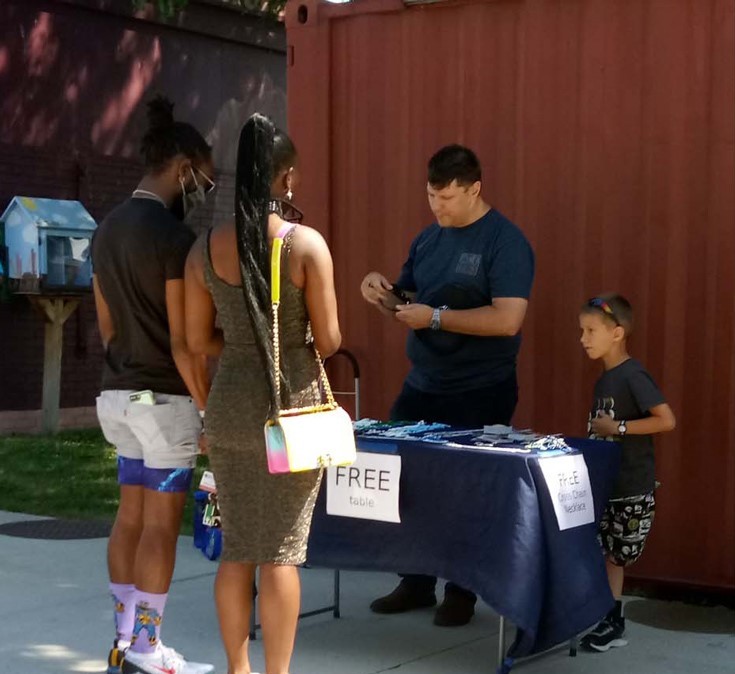 Detroit, MI. Sometimes you can just tell when God is working, as was the case in today’s story. A couple had no idea who St. Benedict was (even though they were wearing bracelets w/ his medal), but they were about to find out!

The following report comes to us from evangelist Mark with our SPSE National team in Warren, MI:

Five evangelists — Steve, Br. John, George, Mark, and Randy — evangelized on a recent Saturday morning at Eastern Market, a large and popular farmer’s market near downtown Detroit. It was the Feast of St. Benedict so we made sure to bring St. Benedict medals, St. Benedict crucifixes as well their corresponding holy cards.

A young couple parked their car directly in front of our table. Steve quickly offered them free rosaries and offered to pray with them. As the couple approached our table, Steve immediately noticed that both of them were wearing bracelets with St. Benedict medals on them. Mark said “You know about St. Patrick’s Day, well today is St. Benedict’s Day!” Both of them were absolutely amazed! Neither one of them was Catholic or even heard of St. Benedict, but they were unknowingly wearing St. Benedict medals on his feast day. Steve told them about the power of the St. Benedict medal and protection from evil. He gave them St. Benedict prayer cards and encouraged them to pray for protection from Satan. The young woman lamented that there’s a lot of evil in the world, seemingly more and more evil every day.

Later on, George offered rosaries to dozens of pedestrians and most people graciously accepted them. He had a long conversation with Chad and Tiffany as well as their young son. George spoke about the Blessed Virgin Mary as the model Christian, the mother of Jesus and, in turn, the mother of all Christians. The couple was very receptive; Chad agreed that Mary is indeed the Mother of God and a powerful intercessor. George asked the couple if they had any prayer intentions and Chad stated that they are engaged to marry this fall. George prayed that Chad and Tiffany have a happy, healthy, and holy marriage. He prayed that they would be good spouses, good parents, and that they would do the will of God in their lives.

In about two hours, we handed out 100 rosaries and pamphlets as well as 50 St. Benedict medals with chains, 50 crucifixes with chains, and their corresponding holy cards.