“God is The Greatest” 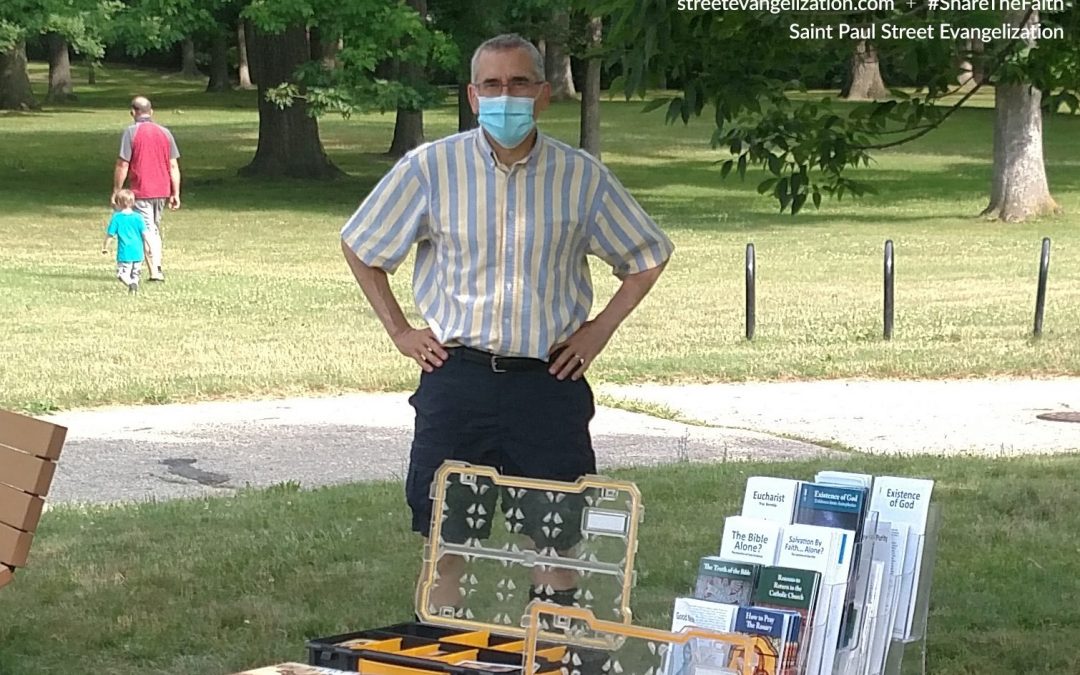 Lansing, MI. Today’s story features a team who felt the promptings of God to get back out there and evangelize. And they were certainly glad that they did.

Click here to read more stories from our team in Lansing, MI

The following report comes to us from evangelist Dave from our team in Lansing, MI:

Myself and Tom went out last Saturday morning to Potter Park Zoo here in Lansing. We set up a table about fifty feet from the park entrance. We set out all kinds of Holy medals, religious cards, books and literature. We left chains separate so people could put together the medals that they wanted. Had many people stop and get medals, asking their situation and how they were doing with the pandemic. Many were receptive and there was a steady flow of people going into the park. We had some good encounters and were able to pray over four different people, all with different situations.

The first lady I prayed with had two daughters that were twins. She was an elderly woman and had mentioned that one had died and one was in prison. I prayed for peace and comfort in her heart, and that God Had her daughters in his hands. The next lady I prayed over was elderly and was on oxygen. She had her two daughters with her and they took holy medals. I asked her if there was anything she needed prayer for, and she said she had hospice coming to her house and was basically waiting to die. Well, what an opportunity! We prayed for peace and comfort for her and her daughters, then prayed a healing prayer over the woman, which was powerful! Next, we encountered a young man and his wife. They were Catholic, he was from Pennsylvania, and just moved to the area and started going back Mass at St James. So we prayed with him and encouraged him to keep seeking the Lord and what He has for him. The last woman I prayed over had her three little daughters with her, from about 7 yrs. and younger, and I asked her if there was anything she needed prayer for. She hesitated for a moment, but then said, “Well, my church has already prayed over me, but I have COVID and am recovering.” So I prayed for continuing healing and that God would protect their family and be with them always.

Tom and I were out there for about two and a half hours. Time just flew by because of all the encounters. I personally had felt God prompting me to go out and evangelize, since the pandemic started, so much so that I almost couldn’t hold back. Tom sent out a mass email to the team, but I was the only one that responded. Thank God for Tom, we both felt that just a presence out in the world, to bring a little hope was worth it, no matter what happened that day. What a day! God is the greatest, Come, Holy Spirit!