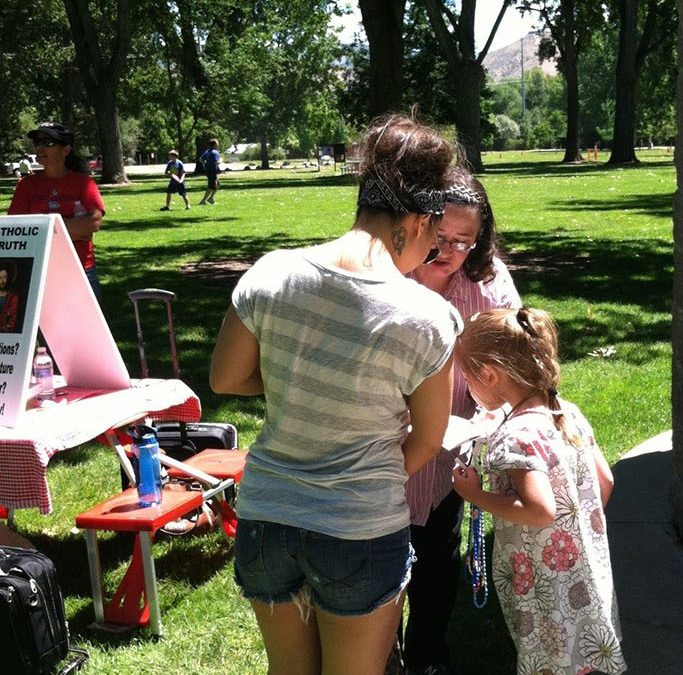 Boise, ID. One of our evangelists expressed an important truth in today’s story. Sometimes God waits for a movement toward repentance and the will to stop sinful habits before he reaches down with healing. God patiently waits for us to want to change, and then, in His timing, will act.

Click to read more stories from our team in Boise, ID

The following report comes to us from evangelist Lucy from our team in Boise, ID:

Two evangelists were out today and gave away at least 20 rosaries and the corresponding pamphlets, and one confession pamphlet. Our first encounter featured a man who stopped, excited because his wife had just had their first-born son, “Anthony”. The new dad was still wearing his hospital badge and wrist ID band. His wife had needed a C-section, but was doing fine now. The man was out to get some food (presumably unavailable from the hospital cafeteria). He accepted our only baby blue Rosary for his new boy. Happy birthday Anthony, may your life be one of steadfast love for Christ Jesus and his Church!

A woman who stopped a couple of weeks ago, stopped again. She said she hadn’t yet given her brother “Dave” the rosary she’d gotten at that time. Lucy gave her a copy of the “Confession” pamphlet for him, telling her that it had a good self-test of where his relationship was with God, and telling her that sometimes God waits for a movement toward repentance and the will to stop sinful habits before he reaches down with healing. The woman’s eyes lit up at that, and she said she’d tell her brother.