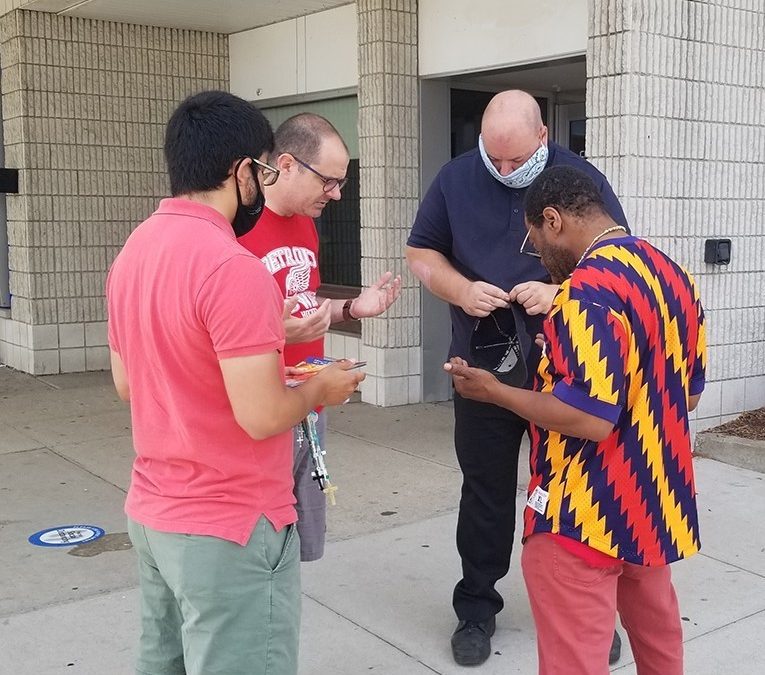 Detroit, MI. Not only do we minister to people who don’t know the Lord while on the street, but also to those who do know Him but are struggling with something and need some encouragement. Today was a perfect example of how members of the body of Christ can help lift each other up when they are low.

Click to read more stories from our National SPSE team in Warren, MI

The following report comes to us from evangelist Michael with our National SPSE in Warren, MI:

Eight evangelists made it out to Eastern Market Saturday to share the Good News, and split into two teams so we could reach as many people as possible. While the sidewalks weren’t as crowded as they would be during pre-pandemic times, it still was fairly busy. We had been evangelizing for about an hour and a half, and were just about to wrap up for lunch. But God had one more appointment for us.

A man named “Max” stopped by our booth while his wife went into the bank behind us. He was a Christian and wanted to talk about the current state of Christianity in America. He asked us if we felt like people were clinging to God during these tough times, or if they were falling away. I told him honestly it seemed like people were falling away, and a fellow evangelist Mark chimed in that in challenging times, people tend to either gravitate towards God for help or run away from Him. We encouraged each other to stay with the Lord and prayed at the end of our conversation for strength, peace and wisdom.