“Sharing Our Messiah at the Market” 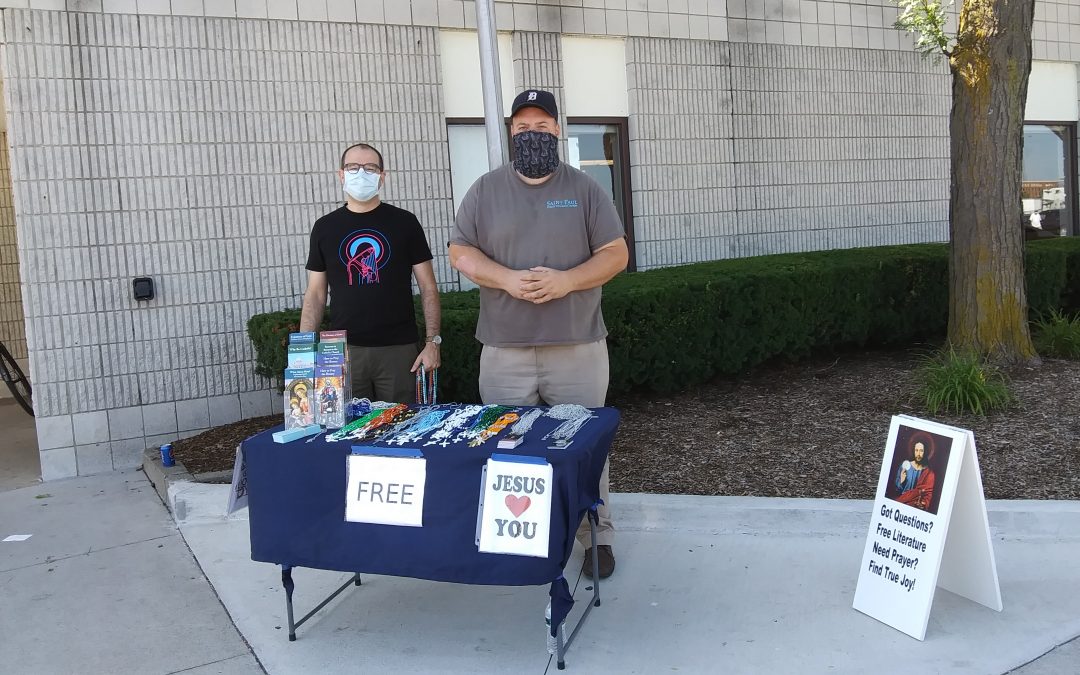 Today we had five evangelists present to share the Good News with passersby. We set up two separate tables to have maximum exposure, with two evangelists at one table and three at the other. Here are just a few stories.

Steve and I met a young man, Tom, who was raised Catholic. He was locking his bike to the bike rack right next to our table and was on his way to get something to eat at one of the food trucks. Tom said he went to Holy Mass every Sunday as a child but only went approximately once a month now. We told him he should go every Sunday, that God wants to see him. When we asked if he’d been to confession recently, he said within the last month or two. He seemed to accept our encouragement, and he departed from us hopefully with some motivation to come back to the regular practice of his faith.

A couple walked by and we offered them a free rosary or Miraculous Medal. They seemed appreciative, and when we inquired about their personal faith, the man stated that he was raised Catholic but simply believes in God without a faith tradition now. Apparently after fighting in Afghanistan for our country and seeing some things done in the name of religion, he had written off formal religious practice. We tried to explain that not all religions would injure another, and tried to encourage him to come back to Catholicism. He and his wife seemed to be open to listening to us, but eventually had to leave to continue with their plans for the day.
Steve ran into a man named Mitch that he had evangelized the week before. He wanted to follow up with Mitch to see how he was doing. Unfortunately, the man’s brother had just died of a variety of ailments, once of which was COVID-19. Mitch wasn’t altogether surprised by his brother’s passing, as he had been sick for some time. Steve was there to hopefully offer some words of comfort.