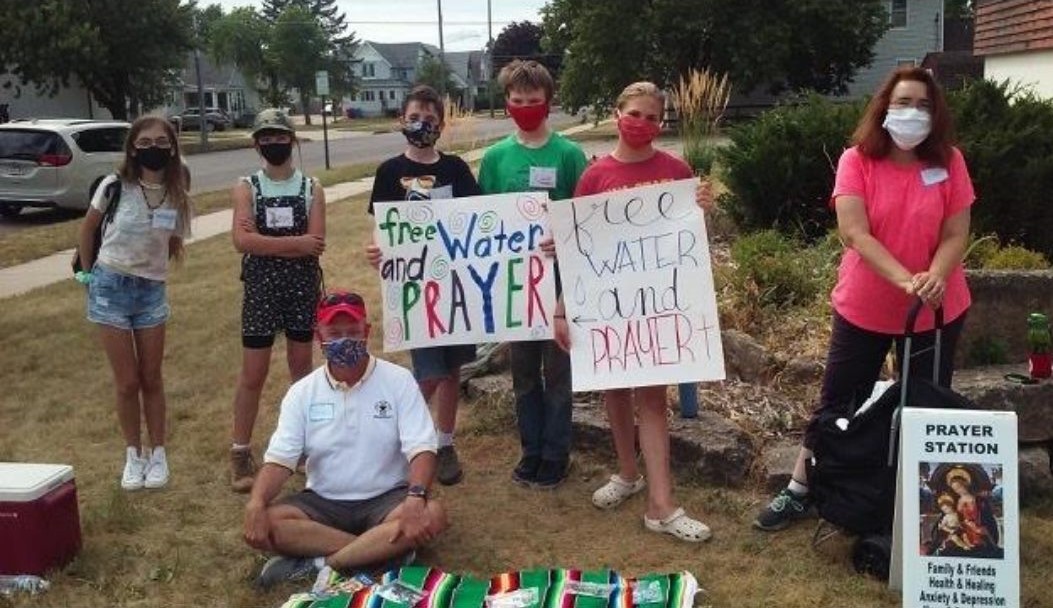 Recently, missionaries Deb and Denise taught teens from the Catholic parishes of Winona to street evangelize as an act of spiritual service to the community. They split into three teams of five (w/ two chaperones) and walked to different parts of town to try it out. They put up stations with free cold water and pre-bagged rosaries and prayer cards, after creating posters shouting “Free Water and Prayer.” My youth team and I stationed ourselves on a fairly busy street, on the lawn of the local state university Newman Center. Two teens went up a block, holding signs pointing at the traffic. Two people stood at the front lawn, waving and smiling with the water and rosaries, one ready to take prayer requests. A few went to sit in the shade and intercede for those passing by this station of hope. Social distancing was not a problem!

God is good! As soon as we set up, a woman pulled over and immediately said, “Hey! I need prayer!” We prayed for her troubles and she gratefully accepted the water, rosary, and prayer card. The teen who was holding the water and prayer sign she saw was thrilled: “Wow! She saw it and just turned in! This is great!” Then we had a slow period and spent time praying for those passing by. We got lots of smiles and waves from passersby. As we were about to pack up, we got flooded. Teens talked to Rich, who was living in his car and wanted prayers for housing, and Maria and Tony, who needed family reconciliation. Maria is a devout Catholic who said “this is amazing! You all have no idea how much I needed this—you were God’s angels today!” We walked back to the Cathedral and brought together the prayers from the town to take to the Church, and those praying for 1st Friday adoration. The exercise was such a hit that, despite reticence and shyness, they want to do more!

The youth minister said the groups learned so much from the training, had a great time and two of the groups actually chose to make time to go out again! Anna has a great answered prayer story about a lost hearing aid recovered in 3 hours after asking for prayer! On our evaluations at the end of the three days, evangelization was the number one thing they brought up. It came up as the biggest thing they learned, favorite experience, and what they saw as their own next steps. Teenagers…ready to change the world if we’ll let them!”